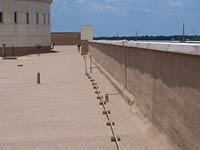 In April 2007, the George H.W. Bush Presidential Library and Museum began an $8.3 million renovation to the core exhibits profiling the former president ...

In April 2007, the George H.W. Bush Presidential Library and Museum began an $8.3 million renovation to the core exhibits profiling the former president.

Along with this larger renovation project, the library was fixing about 75,000 square feet of the flat, spray-applied polyurethane foam (SPF) roof that had provided almost 10 years of service.

The library and museum building was built in November 1997, and it sits with several others on about 90 acres of the Texas A&M University campus in College Station, Texas.

“We were redoing the core exhibit, so I thought it was a good time to check the roof,” says Robert Spacek, the library’s facility operations specialist.

The original roof was a foam and silicone-coated roofing system that offered significant energy savings compared to more conventional systems. As part of the renovation, Spacek and his team talked about tearing off the existing roof and replacing it. But this option would have been both expensive and time-consuming.

The library also would have had to move artifacts and records and close the building to the public during renovations. Technicians finally discovered certain parts of the roof needed minor repairs, so they avoided tearing off and replacing the entire roof.

Once the project was approved, the library assigned contractor John Austin to work on the project. Austin evaluated the structure and called in his company’s waterproofing division.

“There was nothing wrong with the base foam-roofing insulation,” Austin says. “But there were some leaks related to the rotunda and control joints in the windows, and membrane repairs were ineffective to prevent those roof leaks.”

Having found the root of the problem, Austin used the Elastospray SPF roofing system from BASF Polyurethane Foam Enterprises LLC, to perform minor repairs on various parts of the existing roof, followed by a recoating of the entire roof to provide a consistent and fresh appearance.

This renewal continued to deliver energy savings inherent in SPF roofing systems, prolonged the original roof’s performance life, and provided a fairly quick installation with minimal disruption at a much lower cost compared with a tear-off and replacement. Avoiding a tear-off and replacement also helped divert a great deal of waste from landfills.

The work did not inconvenience the public or expose artifacts to the elements because Austin and his team decided to repair and recoat – not replace – the original roof. The library also received a new 15-year warranty for the roof. 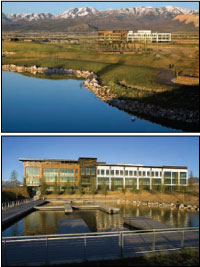 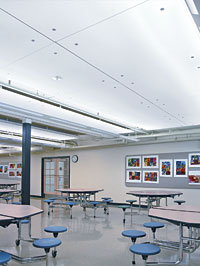