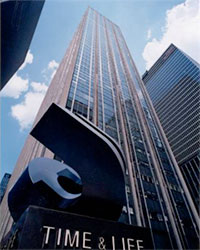 For more than two decades at the 48-story Time & Life Building in Rockefeller Center, HVAC motors regularly broke down. Preventive maintenance pointed to electrical bearing damage as the culprit.

For more than two decades at the 48-story Time & Life Building in Rockefeller Center, HVAC motors regularly broke down. Preventive maintenance pointed to electrical bearing damage as the culprit.

Typical fan or pump motors use less power if the input is modulated by variable frequency drives (VFDs). But without mitigation, the high-frequency currents induced by VFDs discharge from a motor’s shaft to its bearings, leaving pits in ball bearings and bearing race walls. Concentrated pitting at regular intervals along a race wall can cause washboard-like ridges called fluting, a source of noise and vibration. By this time, bearing failure is often imminent.

Searching for a solution to its motor performance issues, Time & Life decided to test out an AEGIS SGR Bearing Protection Ring on a 50-HP fan motor that was notorious for running hot and making a lot of noise due to short-lived bearings. Ron Perez, the building’s manager of engineering, called it “one of the most annoying motors in the building.”

Follow-up testing proved the SGR successful. Since the AEGIS SGR was installed in February 2008, the motor has run quietly and at least 100 degrees cooler. Tests two weeks after the installation showed negligible shaft currents. A year later, the voltage was even lower. Perez concluded the ring had solved the problem. As of September 2010, he had installed AEGIS SGRs on 41 additional fan motors at Time & Life.

Installed on a VFD-controlled motor, the AEGIS SGR Bearing Protection Ring requires no maintenance, lasts for the life of the motor, and qualifies as sustainable technology under the Federal Energy Management Program, according to the company.

When the first buildings of Pennsylvania State Capitol Complex were constructed 117 years ago, the designers couldn’t have anticipated all of the infrastructure requirements of modern office buildings.

To accommodate a growing enrollment and the need for more classroom space, San Diego State University converted a 5,800-square-foot gymnasium into a 215-person lecture hall

Santa Barbara (Calif.) Cottage Hospital must transfer patients quickly for different services, but the hospital’s automatic door controls were not keeping up with the fast-paced environment