Part 3 of a 4-part article on how the state’s facilities are reducing water use
By Ronald Kovach, Managing Editor   Green
OTHER PARTS OF THIS ARTICLEPt. 1: Facilities Respond to California’s DroughtPt. 2: California Water-Use Targets Include Sprinklers, Water Reclamation, LandscapingPt. 3: This PagePt. 4: Dishwashing Efficiency, Xeriscaping Help Cut California Water Use

In response to California Gov. Jerry Brown’s mandatory-water-reduction order, many of the state’s facilities went looking for conservation opportunities and sometimes found them in better design, better management, and new water-saving technology.

When the governor’s edict came out, the Irvine Company, a property management firm, appointed its vice president of environmental affairs, Dean Kirk, as chair of its new water conservation task force and charged a multi-division team with understanding the new water requirements and how to meet them. The water emphasis was nothing new at Irvine, Kirk says; the company has long had a strong commitment to water conservation and recycled water.

Still, the team “dusted off” Irvine’s portfolio of 500 buildings, which range from skyscrapers and resorts to retail and apartment facilities, and went looking for new exterior and interior conservation opportunities, he says. These have included installing high-efficiency sprinkler systems, irrigation controllers, and smart valves; seeking areas where turf might be replaced with landscapes that are more drought-tolerant; and managing the overall system more efficiently. Irvine says its measures cut outdoor potable water use by about 30 percent and 37 percent, respectively, at the two biggest water agencies it uses — the Irvine Ranch Water District and the city of Newport — over June, July, and August.

At Stanford Health Care, in Palo Alto, the organization had undertaken many water-reduction efforts well before the April edict, starting with free, detailed water audits done in 2009. The audits provided a clear understanding of water use and supported the development of conservation priorities and investments, says Krisanne Hanson, director of sustainability. The latter included installation of over 700 laminar flow restrictors, which are approved for healthcare because they don’t trap potentially bacteria-containing biofilm like traditional aerator devices, as well as installation of low-flow fixtures, a reduction in exterior watering, the shuttering of non-critical outdoor water features, and the education of 10,000 staff members as leak-detecting “water warriors.”

But the biggest step was a major upgrade of the huge cleaning and sterilization system for surgical instruments, which began saving the organization 12 million gallons of water a year and was a key factor in its achieving a 38 percent year-over-year water reduction, Hanson says. Every year the medical center sterilizes about 18 million surgical instruments. Under Stanford’s previous systems, steam sterilizers generated hot condensate that needed to be cooled before discharge into the sewer system. In 2012, Stanford began reaping big water savings by installing a closed-loop system which contains and cools the condensate and eliminates the need to cool it with domestic water, Hanson says. 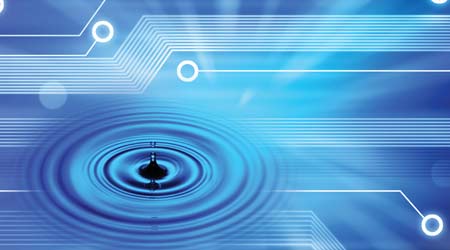