Changing water-wasting commercial-dishwashing methods and implementing a landscaping approach called xeriscaping are some of the additional tools California’s facilities people have considered in response to the governor’s water-use order.

One big water-user, the commercial dishwasher, is getting new scrutiny in the state. At the University of San Francisco, a more efficient dishwashing system in the campus kitchen installed last summer has reduced water use by 720,000 gallons, says Craig Petersen, director of operations. The kitchen serves about 10,000 guests per day. “Ultimately,” he says, “the savings are three-fold: less water used, less energy required to heat the water, and less wastewater (sewer) disposal fees.”

At San Ramon’s Food Service Technology Center, a testing organization funded by Pacific Gas & Electric Company and operated by Fisher-Nickel Inc., a new study of water and energy use in large dishwashing machines found the equipment uses two to three times the water expected, says research engineer Amin Delagah. The machines are often water-inefficient, he says, but outdated or aging equipment is not the only big problem. Other factors are at play too, he says, including poor commissioning of new equipment, inadequate training, careless operating practices, operator turnover, and poor maintenance.

“It’s not just that it’s old equipment. You put a brand new machine in there, it’s going to have problems if the same old habits carry over to the new machine,” Delagah says.

At SAP, water efforts have included moving into a xeriscape program that removes non-native vegetation and redesigns landscaping to add drip systems and native vegetation that requires less water, fertilizer, and maintenance, Morgan says. The company, with 4,000 workers in California, is installing a submetering water program in its cafeterias as a means of providing the quantitative data that allows qualitative decisions. One way to get employees’ attention about water use, Morgan suggests, is to describe its effect on company profit margins and hence bonuses. “Economics,” he says, “is a powerful approach that has cross-functional impact.” 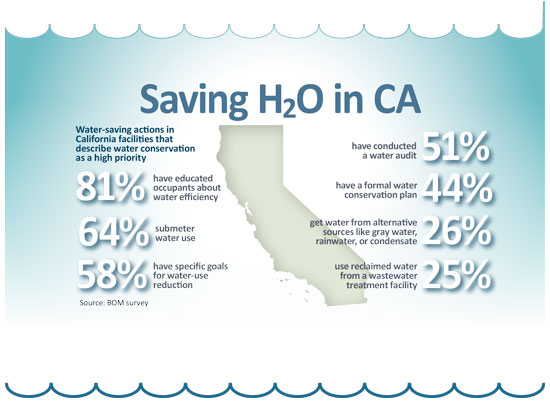 Photo Caption: At California State University, Stanislaus, the Reflecting Pond is part of a water reclamation system that collects and re-uses all rainwater.