Technology and data are crucial — they are the means to the end of creating the skilled, high-performance people Brendan Robinson craves for his FM team.

Robinson stresses that the positive results are not because of the application of software. A high-performance team is not created with software, he says. It’s all about the people. “Authenticity is really in the DNA at Under Armour,” Robinson says. “I’m trying to establish a very authentic culture. How I chose to do that is by building two-way trust. So we trust our front line teammates with the real challenges and the real messy data and information that leadership is trying to grapple with when making decisions. And then they reward us with their real challenges and the opportunities that they see every day when they’re doing their jobs.”

Robinson sees data and information as a way to create a dialogue with his team. Engaging in that dialogue leads to a team that learns how to make better decisions and take ownership of their situation, he says.

One example of dialogue is how the team approached the problem of cardboard boxes. There is an extreme volume of cardboard at the headquarters, due to all the product samples ordered to the campus. The facilities and operations team was running around, trying to keep up with recycling the corrugated tidal wave and just wasn’t able to do so. 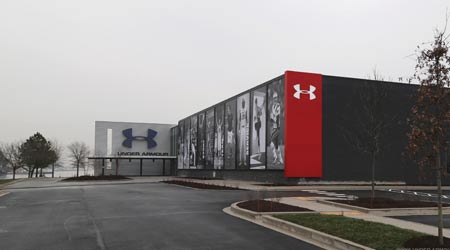 (Building 37 is an adaptive reuse of a former Sam’s Club. The 170,000-square-foot office building is part of the expansion onto Port Covington in Baltimore.)

Robinson put the problem to the team and the solution they came up with was hiring a position just to deal with cardboard. “They came up with the idea of hiring a person who will literally chase cardboard all day, bale it up, and then sell it,” Robinson says. “They didn’t have the time to chase it, I didn’t have the solution, but we talked about it and the team came back with an idea of having a cardboard porter.” By creating a position, the problem of mounds of cardboard is solved, the collected cardboard is kept from mingling with other recyclables and so stays clean and saleable, and a new stream of revenue was created for the company.

“The position paid for itself, the campus looked better, and everyone was able to go about their daily business,” Robinson says. “That’s one example of an innovation our team helped us come up with because we shared the problem with them.”

Another way Robinson uses data and dialogue to drive change is by making sure SLAs are realistic. Data takes personal opinion out of the equation, he says. If an SLA isn’t being met, maybe it’s the wrong SLA in the first place. If data shows that a certain process cannot possibly be done within the expected time frame, instead of slogging forward, Robinson wants to dig into what is really going on. “We learn new things about ourselves that we couldn’t see, because the data helps reveal that,” he says. For example, an SLA for relamping could be inappropriate once a fixture is changed to an LED luminaire which needs to be ordered and replaced entirely, unlike swapping out a lamp stocked in a storeroom onsite. 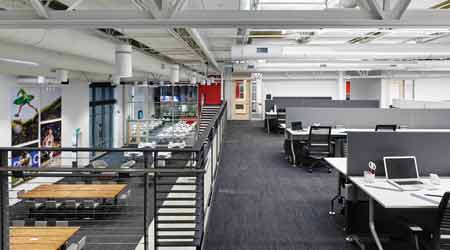 (Inside Under Armor’s Building 37 are a variety of collaborative Millennial-friendly spaces.)

Beyond the facilities team, Robinson has used data to improve the larger workplace experience for all Under Armour teammates, says Larkin. She says the facilities and operations team is very actively involved with teammates as they move into new or refurbished spaces. Data from surveys has directly impacted the design and implementation of remodeled space, such as new collaboration space.

Space temperature is another data-driven improvement she can point to. “We were having some major issues with temperature controls within the building,” Larkin says. “It would be 95 degrees outside and it would be like Antarctica in here.” Robinson’s team deployed an app to give teammates control over their own environment. “When the teammates have control, being able to adjust how things feel, it makes them feel better about coming to work everyday,” Larkin says.

Larkin characterizes Robinson’s leadership as highly responsive and meticulous. That might be informed by his previous life, working at the Architect of the Capitol, says Larkin. In a very fast-paced company, Robinson emphasized structure and discipline around processes used by the facilities team. “I think it has brought a lot of stability and that in turn has helped us create a safer, cleaner campus that is really focused on incredible communication response time and collaboration,” Larkin says.

Robinson is also deeply invested in the teammate base and wants to “make change that will create a happy, healthy, safe environment for them to thrive and grow in,” she says.

One way this manifests is through creating an onsite concierge service. In 2014, the no. 4 complaint among teammates was lack of proximity to amenities. By 2016, access to amenities scored off the charts. Larkin says Under Armour had started providing massage services in the past, but “Brendan really came in and took it to the next level by really starting to look at a variety of different things.” Available services include drycleaning and manicures. “Brendan and the extended facilities team really think about what else would be a huge benefit to have here on main campus that would just be a big win for teammates,” she says.

Three years into leading the facilities team at Under Armour, Robinson would offer one insight to his younger self. When measuring performance, the team can start to feel like they are in a competition, which couldn’t be further from the truth, Robinson says. “It’s not a competition between teammates — it’s about giving us access to information so the team can ask the right questions and work together to improve our customer service,” he says, adding that he would have been more proactive about reinforcing that message along the way.

At the heart of the change that Robinson has been able to effect at Under Armour, he comes back to the importance of having come together as a team to create the logic model. “The logic model is the way to start a conversation with my team,” Robinson says. “It’s a way of stating clearly what the most important things we do are and helping my team connect the dots for how they support the mission.” The results ripple through the team. They know better where to spend their time, what things to focus on to continually improve, and how to prioritize in the moment. Moreover, it gives them the talking points to communicate to others why the things they do are important to the organization, Robinson says. “We grow from there and try to do good things.”