NFPA Code Approved Amid Some Heat

The National Fire Protection Association has approved a new building code that is intended to compete with the existing International Code Council’s (ICC) set of building codes. NFPA 5000 Building Construction and Safety code is expected to be published this September.

NFPA 5000 covers all aspects of design and construction of buildings and structures for new and renovated buildings and offers extensive safety features. The code is a big piece in what NFPA is calling its Comprehensive Consensus Codes set that, when completed, will offer an integrated set of codes for the entire building that will include plumbing, mechanical, electrical and energy issues.

“The NFPA 5000 code has the vast support of the building community,” says Gary Keith, vice president of building codes for NFPA. “It was built on the expertise of a broad range of building experts.”

Although it’s the only building code that meets the American National Standards Institute’s consensus-based process, NFPA 5000 is not without its critics.

Building Owners and Managers Association (BOMA) International thinks the code is prescriptive, despite NFPA’s claim that parts are performance-based.

Marco Giamberardino, BOMA’s director of codes and standards says the code certainly doesn’t represent building owner interests and the approval process was unfair. He says BOMA was asked to vote on a draft of the code that had numerous problems and many appeals pending, which were going to be addressed only after the final vote.

BOMA is asking its members to support the ICC code and not NFPA 5000.

Built in 1885 and designed by architect Henry Hobson Richardson, the Allegheny County Jail in downtown Pittsburgh had become outdated and overcrowded by 1990. A federal court ruling on a prisoner-sponsored lawsuit gave the county two choices for the 200,000-square-foot jail: repair the building or close it.

The building’s status as a historic landmark meant that adaptive reuse, not demolition, was the answer. The family court system, also suffering from cramped quarters, emerged as the logical future tenant. IKM Incorporated Architects worked with the county on the design and financing of the facility — an innovative design/build/leaseback arrangement. The project was finally completed in 2000.

The exterior needed extensive repointing, and several structural cracks had to be repaired to bring the exterior back to its original look. The interior was vastly modified. The prison was largely a hollow shell with prison cells stacked, so concrete floors had to be added. Wire, cables and ducts were carefully installed to preserve the historic look.

States must now certify that their building codes meet the requirements in ASHRAE’s 1999 energy conservation standard, under a ruling by the United States Department of Energy (DOE). ANSI/ASHRAE/IESNA Standard 90.1-1999, Energy Standard for Buildings Except Low-Rise Residential Buildings, has been established by the DOE as the commercial building reference standard for state building energy codes under the federal law.

The law requires all states to certify that they have state energy codes in place that are at least as stringent as 90.1-1999, or justify why they cannot comply with this.

Larry F. Soehren, vice president of Kiemle & Hagood Company in Spokane, Wash., is the new president of the Building Owners and Managers Association (BOMA) International. Soehren has been very active in executive positions for 14 years on the regional, national and international level for BOMA. 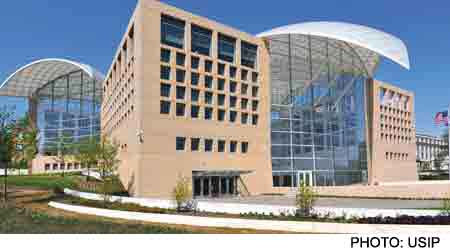