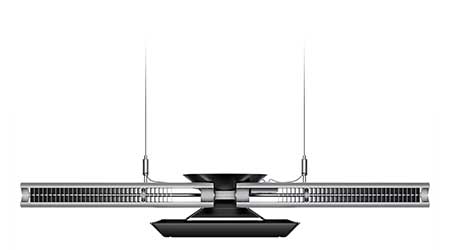 The CuBeam Duo suspended light is a combined up and down light that has full, flexible illumination control.

A custom-built driver splits the ratio of light to suit different needs. During presentations, more light can be directed upward and less light downward, so the presenter’s screen can become the focal point. During meetings, more light directed downward illuminates the table, to aid note-taking and discussions across the table. Outside of working hours, full up light provides a blanket of ambient illumination across the space – ideal for maintenance staff.

With adjustable one-touch shutters and a reflective surface, Ricochet technology converts unwanted down light into up light, preventing light being wasted. For up light, closing the adjustable shutters allows recovery of unwanted down light. It reflects it upwards, to maximize lumen output and provide very high efficacy. For down light, opening the shutters allows more lumens to go downwards, to maximize downward light distribution onto the task plane.

Cu-Beam suspended lights come equipped with an effective cooling system. Heat is transferred away from the light source and dissipated along the wings. Six vacuum-sealed tubes span the wings of the Cu-Beam suspended lights. Each tube contains a drop of water. When the light is switched on, the heat generated by the LEDs turns the water inside the tubes into vapor. The vapor begins moving along the tubes due to the difference in pressure. As soon as the vapor reaches a cool area of the tube, it condenses back into water. Heat energy is dissipated evenly through a series of aluminium fins, which form the light's wings. A copper wick draws the water back towards the LEDs via capillary action, and the cycle begins again. This cooling system enables Cu-Beam suspended lights to use high-power LEDs, instead of combining the light output of multiple less powerful LEDs.