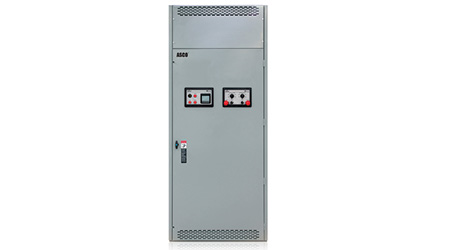 Facility managers can now, upon the introduction of the ASCO Series 300 Generator Paralleling System, consider pre-packaged transfer switch-based power systems for paralleling generators as an alternative to circuit breakers. The first of its type for load management for mid-tier installations, the ASCO Series 300 system, which brings high-power capabilities to mid-tier installations, is capable of paralleling 2 to 4 gen-set installations and managing 4 to 8 transfer switch load blocks at distributed data centers, commercial and telecom operations, oil and gas processes, and healthcare, government, agricultural, public, and educational facilities.

The ASCO Series 300 system takes an innovative approach to paralleling that utilizes generator power for switching and automatic controls and features a graphic touch screen as a convenient window to metering, event and alarm logs, and other data. The system, which brings together the paralleling controls and contactors for two generators into a single section for efficient use of space, is an economical alternative to the traditional switching capability of two circuit breakers.

the ASCO Series 300 is available from 208 to 600 volts. “Because it eliminates job-specific engineering for either prime or emergency power applications that require paralleling two, three or four gen-set installations, the ASCO Series 300 system can be configured quickly for fast-track delivery,” says Bhavesh Patel, vice president, Global Marketing, at ASCO. “It can synchronize, parallel, and provide load sharing for a wide range of gen-sets, of different sizes and manufacturers using bias signals to the voltage regulator and governor. This provides needed flexibility to facility managers when they plan power expansions and equipment replacement.”