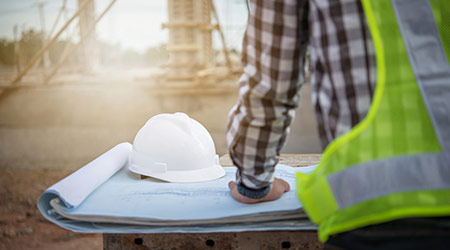 New construction starts in June climbed 11 percent to a seasonally adjusted annual rate of $896.3 billion, according to Dodge Data & Analytics. The increase marked the second double-digit gain in a row, following the 15 percent hike that was reported for May. Boosting activity in June was a sharp 57 percent advance for nonresidential building, which benefitted from the start of two massive manufacturing plant projects and two massive office building projects. The two large manufacturing projects were a $6.5 billion uranium processing facility in Oak Ridge TN and a $1.7 billion petrochemical plant in Port Arthur TX, while the two large office projects were the $1.8 billion Spiral office tower in New York NY and a $665 million office tower in Chicago IL. Residential building in June grew 4 percent, helped by growth for multifamily housing. The nonbuilding construction sector (public works and electric utilities) retreated 28 percent in June, pulling back after the sharp 37 percent increase reported in May that reflected the start of several large natural gas pipelines and rail-related projects. Through the first six months of 2018, total construction starts on an unadjusted basis were $395.7 billion, up 1 percent from the same period a year ago. If the volatile electric utility/gas plant category is excluded, total construction starts during the first six months of 2018 would be up 3 percent relative to last year.

June’s data raised the Dodge Index to 190 (2000=100), compared to an upwardly revised 170 for May. “The monthly pattern for construction starts will often reflect the presence or absence of very large projects, and after May received a lift from unusually large projects, it was even more true in June,” stated Robert A. Murray, chief economist for Dodge Data & Analytics. “Following the lackluster activity in April, the strength shown during May and June enabled the second quarter average for total construction starts to be up 3 percent from the first quarter, which itself was up 2 percent from the final three months of 2017. On that basis, one can say that the expansion for construction starts continued at a modest pace during the first half of 2018. At the same time, it’s not expected that July will get the same support from large projects that took place in June.”

“Several features of the first half of 2018 stand out, as shown by the construction start statistics,” Murray continued. “Nonresidential building so far this year has seen gains for manufacturing buildings, educational facilities, and amusement-related facilities, while office building starts have stayed close to last year’s pace. However, transportation terminal starts have not proceeded at the same robust volume that occurred in early 2017, and store construction has weakened further. Residential building is seeing surprising resilience from multifamily housing, even as apartment vacancy rates have moved up gradually. The public works sector is showing widespread increases this year, outweighing a slightly slower (yet still strong) pace for new pipeline projects compared to a year ago. The electric utility/gas plant category continues to decline, exerting a downward pull on total construction starts in similarity to what occurred during 2016 and 2017. Although the construction industry is facing increased headwinds during 2018, namely higher material prices and rising interest rates, these have yet to have a discernible negative impact on the broad level of construction starts. On the plus side, the construction industry is benefitting currently from the tailwinds of a strong economy, some easing of bank lending standards, and greater funding for federal public works programs as the result of the omnibus appropriations legislation passed in March.”

Nonresidential building in June was $402.3 billion (annual rate), up 57 percent from May. The manufacturing building category received an eighteen-fold increase in June relative to a weak May, with the primary boost coming from the June start of the U.S. Department of Energy’s $6.5 billion uranium processing facility in Oak Ridge TN. This massive project will support the nation’s nuclear weapons stockpile and provide uranium for fuel for U.S. Navy submarines and aircraft carriers. If this project is excluded from the June construction start statistics, manufacturing building in June would still have shown a five-fold increase, while nonresidential building would have been up 26 percent and total construction starts would have been up 2 percent. The other large manufacturing building project entered as a June start was a $1.7 billion petrochemical plant expansion and ethane steam cracker plant in Port Arthur TX. The commercial building categories as a group climbed 25 percent in June, advancing further after moderate gains in April (up 5 percent) and May (up 7 percent). Office construction surged 53 percent in June, led by the start of the $1.8 billion, 64-story Spiral office tower in the Hudson Yards district of New York NY, as well as the start of a $665 million, 54-story office building on North Wacker Drive in Chicago IL. Other large office projects in June were a $200 million data center in Ashburn VA, a $200 million office tower in Denver CO, and a $145 million data center in Mesa AZ. Through the first six months of 2018, the top five metropolitan areas in terms of the dollar amount of office construction starts were the following – New York NY, Washington DC, Chicago IL, Omaha NE (due to the May start of a $1.0 billion Facebook data center), and Boston MA. Other commercial categories posting June gains were commercial garages, up 22 percent; store construction, up 18 percent; and warehouses, up 14 percent. The warehouse category was helped by such large projects as a $150 million Amazon distribution center in the Birmingham AL area and a $107 million warehouse complex in Fremont CA. Hotel construction was the one commercial project type to report a June decline, sliding 15 percent, although the latest month did include the start of several large hotel projects in New York NY, such as a $125 million Hard Rock hotel and a $120 million Ritz Carlton hotel.

The institutional building side of nonresidential building increased 11 percent in June. Healthcare facilities had a strong month, jumping 103 percent compared to a lackluster May, led by the $250 million New Trinity Hospital in Minot ND and the $148 million Penn State Health Children’s Hospital in Hershey PA. Educational facilities strengthened 16 percent in June, featuring such university projects as a $230 million facility at the University of Washington in Seattle WA and a $225 million facility at the University of Oregon in Eugene OR, plus the start of large high school projects in Somerville MA ($202 million), Frisco TX ($200 million), Verona WI ($183 million), and Madera CA ($179 million). The top five states in terms of the dollar amount of educational facility starts during the first half of 2018 were the following – Texas, California, New York, Washington, and Oregon. Of the smaller institutional categories, public buildings (courthouses and detention facilities) registered a 12 percent gain in June, but declines were reported for transportation terminals, down 16 percent; religious buildings, down 35 percent; and amusement-related projects, down 37 percent (from a May that included groundbreaking for the $764 million expansion to the Washington State Convention Center in Seattle WA). Despite its decline, the transportation terminal category did include the June start of the new $374 million North Concourse terminal at Reagan National Airport in Arlington VA.

Residential building in June was $323.0 billion (annual rate), up 4 percent. Multifamily housing grew 9 percent in June, advancing for the second month in a row after weak activity in April. There were seven projects valued each at $100 million or more that were reported as construction starts in June, compared to six such projects in May. The large June projects included the $213 million Aston Martin multifamily tower in Miami FL, the $195 million multifamily portion of the $260 million Essex Crossing mixed-use building in New York NY, and the $186 million multifamily portion of a $215 million mixed-use tower in Boston MA. Through the first half of 2018, the top five metropolitan areas ranked by the dollar amount of multifamily starts were – New York NY, Miami FL, Washington DC, Boston MA, and Seattle WA. Metropolitan areas ranked 6 through 10 were – San Francisco CA, Los Angeles CA, Dallas-Ft. Worth TX, Philadelphia PA, and Atlanta GA. The top ten multifamily metropolitan areas in the first half of 2018 showed a fairly balanced mix of gains and declines relative to last year, with six showing gains (including a 22 percent increase for New York NY), while four showed declines. In contrast, the full year 2017 showed declines for seven of the top ten metropolitan areas. Single family housing in June grew 2 percent, and during the first half of 2018 essentially hovered around the improved level of activity that was reported at the end of 2017. By region, the first half of 2018 showed this performance for single family housing compared to last year – the West, up 11 percent; the South Atlantic, up 5 percent; the South Central, up 4 percent; the Northeast, up 2 percent; and the Midwest, up 1 percent.

Nonbuilding construction in June dropped 28 percent to $171.0 billion (annual rate), sliding back after the 37 percent increase that was reported for May. The public works categories as a group dropped 34 percent in June after May’s 44 percent surge. To a large extent, the recent up-and-down pattern shown by public works was related to the volatility exhibited by the miscellaneous public works category, which includes pipelines, mass transit, and site work. The miscellaneous public works category plunged 67 percent in June following May’s 161 percent increase. May included three substantial natural gas pipelines as construction starts (the $2.1 billion Mountaineer Xpress Pipeline, the $1.9 billion Gulf Coast Express Pipeline, and the $600 million Gulf Xpress project) plus two large rail projects (the $1.4 billion Westside Purple Line Extension in Los Angeles CA and the $1.1 billion Green Line Extension in Somerville MA). By contrast, the two largest miscellaneous public works projects entered as June starts were a $576 million segment of the Atlantic Coast natural gas pipeline in West Virginia and a $280 million rail project at Phoenix Sky Harbor International Airport. At the same time, both pipeline and rail-related construction starts have stayed strong during the first half of 2018, with pipeline starts down only 15 percent from a robust first half of 2017 while rail-related starts were up 53 percent compared to last year. The environmental public works categories in June weakened from their May amounts, with water supply construction down 9 percent, river/harbor development down 15 percent, and sewer construction down 58 percent. Highway and bridge construction was the one public works category to show growth in June, climbing 25 percent with the help of such projects as the $312 million I-95 South highway widening project in the Philadelphia PA area and the $270 million I-85 North highway widening project in the Atlanta GA area. The electric utility/gas plant category in June improved 73 percent from a weak May, with the lift coming from five new wind farms located in Iowa ($375 million and $108 million), Kansas ($300 million), Michigan ($261 million), and Minnesota ($158 million).

The 1 percent increase for total construction starts on an unadjusted basis for the first six months of 2018 compared to last year was due to a mixed performance by major sector. Nonresidential building year-to-date dropped 3 percent, due to this pattern by segment – commercial building down 8 percent, institutional building down 6 percent, and manufacturing building up 49 percent. Residential building year-to-date rose 6 percent, with multifamily housing up 8 percent and single family housing up 5 percent. Nonbuilding construction year-to-date was essentially even with last year, with public works up 9 percent and electric utilities/gas plants down 48 percent. By major region, total construction starts during the first six months of 2018 showed this behavior – the South Central, up 10 percent; the South Atlantic, up 4 percent; the Northeast, down 1 percent; the Midwest, down 3 percent; and the West, down 4 percent.