Like nearly 300,000 of Mi-T-M's 800,000 square feet of industrial space, the office complex uses fabric duct air distribution. Mi-T-M CEO A.J. Spiegel's HVAC ductwork material preference for years has been fabric duct, because of its aesthetics and its installation labor savings versus metal duct. Spiegel has requested it in several past campus building projects, a local restaurant, event center, Baymont Inn swimming pool in Bellevue, Iowa, and the 70,000-square-foot Peosta Community Centre. The latter was donated to residents.

Unlike metal duct, the fabric duct industry had yet to develop attenuation because the comparably softer surfaces of fabric duct were proven to reverberate less mechanical equipment noise than their metal counterparts. At Mi-T-M's offices, however, high ambient sound affected inter-cubicle and telephone conversations. "After our first month we decided on somehow abating the mechanical noise," said Thomas Allendorf, managing director of operations, Mi-T-M.

The company is a leading international manufacturer of pressure washers, air compressors, and many other industrial products, many of which are OEM or private labeled.

The building is designed with 1,388 linear feet of DuctSox's premium-grade Sedona XM fabric duct, which includes a built-in anti-microbial agent to prevent biological growth. Although a majority of the 20 duct runs are 22-inch diameter, some runs are 18- and 24-inch-diameter duct along with an occasional elbow or tee for air distribution coverage purposes.

The silver fabric duct is suspended with DuctSox's patented SkeleCore Fabric Tensioning System (FTS), an aluminum metal hoop and center spacer tubing system. The system allows installing contractors to quickly and easily field-adjust the textile tautness and roundness with just a turn of a wrench for wrinkle-free aesthetics. The result is fabric duct that appears inflated regardless of AHU operation or air pressure, which adds to the office areas' aesthetics.

True to the Spiegel's impetus for using fabric duct on the project, 60 to 65 percent of the ductwork installation costs were saved versus using spiral-round metal duct, according to Russ Meyer, president of Meyer Mechanical, Dyersville, Iowa, a 66-year-old, employee-owned and operated HVAC, plumbing, and electrical contractor. Meyer Mechanical was the project's design/build contractor that also installed all the HVAC systems.

The mechanical noise needing abatement was generated by a combination of airflow noise common in all types of ductwork and most of the building's 14 AHUs ranging from 2,625 to 4,400-cfms. The AHUs are supplied by one 220-ton chiller; and four 550,000-BTU, 94-percent-efficient boilers by Weil-McLain, Burr Ridge, Ill. Other mechanical equipment included four 2-ton mini-split systems manufactured by Lennox Industries, Richardson, Texas, to redundantly cool computer and other smaller electronics rooms.

Lab findings revealed the fabric attenuator with a center bullet sound absorber, which attaches to the in-duct tensioning system's spacer tubing, was equally effective in dynamic insertion loss (db) as metal sound attenuators up to 500-Hz and more effective than metal in the 500 to 8,000-Hz range. It was also beta-site tested at Mi-T-M's offices where noise levels dropped 15 db, an exponential calculation representing a decrease of more than 50 percent, according to Wuertzer.

The attenuator also offers an optional bullet centerpiece or it can come without a bullet, the former which was specified at Mi-T-M. Static pressure decreases for a 1,000-fpm example is 0.02-wg. and 0.05-wg. for the non-bullet and bullet versions, respectively. The attenuator is available in diameters ranging from 12 to 30 inches and is installed in-line where the inlet of fabric duct meets connecting metal ductwork from the AHU.

DuctSox Corp. is a manufacturer of fabric ductwork/accessories that markets its products globally through HVAC/R manufacturer's representatives. For more information, visit www.ductsox.com. 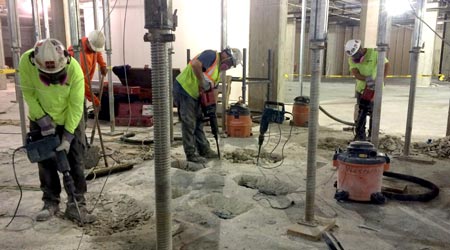