Morton Grove, Ill. — June 27, 2016 — Bell & Gossett (B&G), a Xylem brand, is celebrating 100 years of engineering industry-leading commercial HVAC and plumbing products this year and is setting the agenda for another century of innovative product and application development.

Back in 1916, W.C. Bell and E.J. Gossett formed Bell & Gosset, a Chicago-based manufacturer and seller of case hardening compounds, adding potable water heaters two years later. They set the course for B&G to become one of the world’s leading manufacturers of pumps, valves, heat exchangers, and accessories for plumbing, wastewater and HVAC applications. Looking forward, efficiency and data will continue to change how commercial building systems are designed and run.

“For 100 years, Bell & Gossett has been a leader in efficiency, education, and system expertise,” said Mark Handzel, vice president, product regulatory affairs, and director, HVAC commercial buildings. "While the industry’s landscape has changed over the years, Bell & Gossett continues to focus on helping our customers achieve higher energy efficiency and decrease costs. As we look ahead to the next century, we will continue providing high-quality products, offering world-class training and serving as a thought leader on industry trends.”

As the Bell & Gossett brand marks a century of innovation, here are some notable dates and numbers in the company's history.

87: Number of years that Philadelphia-based R.D. Bitzer Co. has been a stocking representative of Bell & Gossett. The company is still owned and operated by the Bitzer family.

7: Number of U.S. patents held by B&G engineer Gilbert Carlson, recognized internationally as one of the foremost authorities on hydronic heating and an ASHRAE Fellow.

1941: The year B&G moved from Chicago to a new, larger facility in Morton Grove, Ill., still the site of B&G product development and production today. (Photo shows B&G employees at work in 1945 at a Glenview, Ill., research facility.) 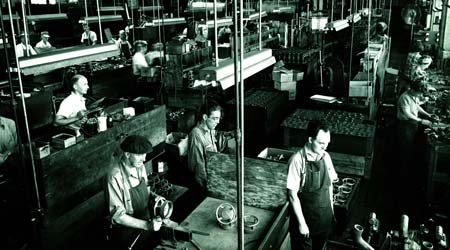 61,000: Number of engineers, contractors, installers, and others who have been educated since 1954 at the Bell & Gossett Little Red Schoolhouse on the proper design, installation, and maintenance of hydronic and steam systems.

1963: The year B&G was acquired by ITT Corp., increasing opportunities for sales of the B&G brand worldwide.

2011: The year the B&G brand became part of a new company, Xylem Inc., after it spun off from ITT.