The Cobo Center's 200,000-square-foot reroof picked up some time and cost efficiencies due to the roof boards used.

The Cobo Center's 200,000-square-foot reroof picked up some time and cost efficiencies due to the roof boards used. Located in Detroit, Mich., the center's reroof was part of the $229 million Phase 3 renovation of the convention and exhibition center that hosts the North American International Auto Show and many other events.

Georgia-Pacific Gypsum’s DensDeck Prime cover boards were specified for the project, with 400,000 square feet installed as two layers of the roofing assembly. After the previous “tar and gravel” built-up roof (BUR) membrane was removed, a new, white roof assembly was installed. First, 5⁄8-inch DensDeck Prime in 4-by-8-foot sheets was mechanically applied to the Type B roofing deck as a thermal barrier. This was followed by a vapor barrier membrane and two layers of 2 1⁄2-inch polyisocyanurate insulation. A cover board layer of 5⁄8-inch DensDeck Prime in 4-by-4-foot sheets came next, topped with a layer of single ply, .080 UltraPly thermoplastic polyolefin (TPO) single-ply roofing membrane.

At the jobsite, DensDeck Prime reportedly scored and snapped better, was smoother, took less adhesive, and the sheets laid down tighter. Several recent enhancements to DensDeck Prime offer broader-than-ever compatibility and higher performance with roofing adhesives. Enhanced fiberglass mats help achieve more uniform application and better bonding with the roofing membrane; usually, this means less adhesive is needed. Also, the board’s face mat now overlaps on the backside of the board so membranes lie more uniformly over the top, further reducing the amount of adhesive used. It also is the first roof board in the industry to offer a 90-day exposure limited warranty for vertical application on parapet walls (1⁄2-inch and 5⁄8-inch DensDeck Prime only). 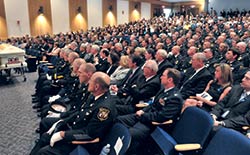 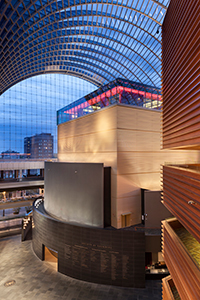