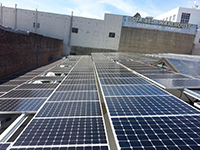 As part of a major renovation seeking net-zero energy and LEED certification, DPR Construction of San Francisco wanted to install solar panels on its roof to generate electricity for use within its downtown office.

As part of a major renovation seeking net-zero energy and LEED certification, DPR Construction of San Francisco wanted to install solar panels on its roof to generate electricity for use within its downtown office. The remodel also included natural lighting and a new energy efficient HVAC system. However, the building's barrel roof with HVAC equipment and skylights is not the ideal platform for a crystalline panel solar system.

The 118kW project had an energy production goal of 158,000 kWh in the first year. The building is in an urban area in downtown San Francisco, making achieving that production ratio challenging. Taller buildings on three sides of the DPR Construction offices required the arrays to be elevated to a level where the sun could hit them. A second challenge was obstructions. The roof has two large atriums, several skylights, HVAC units and 16 Solatube skylights. These take up space on the roof that could have been used for solar, and the fire guidelines that require pathways to and clearances around these objects further reduced the usable space on the roof. Finally, the truss engineering of the roof dictated very specific loading points to attach the solar system. They were at 20 foot spans, so the racking solution required had to be able to handle 20-foot spans, at elevation, with minimal part count, no field welding and have the versatility to accommodate site changes for newly installed solar tubes.

The solution to the challenges on the curved roof solar project was found in part through a watertight attachment system from Silverback Solar. The company's mounting system features a roof attachment system that creates a completely watertight structural mounting point. It also features a patented adjustable sprocket to allow adjustments with the curvature of the roof. The product is lightweight, which improves time and ease to install the racking. The ability to adjust the bracing and supports makes the racking adaptable to varying roof terrains. And, the racking comes precut and bundled per array, which is also identified per location on the site layout.