Keeping sidewalks clear of snow and ice is among the more important tasks grounds managers face. Maintaining dry and clean sidewalks is especially crucial at facilities with thousands of visitors every year.

John Kulka, manager of grounds and garages, has 10 employees helping with snow and ice management during the winter months.

“Due to our type of operation, the expectation is to always have snow and ice cleared right down to the cement,” Kulka says. “We’re held to very high standards.”

To keep sidewalks clear and prevent visitors from slipping and injuring themselves, the complex faced an expensive problem every spring: having to re-sod areas where salt was over-applied and burned grass along the sidewalks.  Kulka began searching for alternatives.
“I started doing some Internet searching to find other ways of managing ice on sidewalks, and I discovered the drop-spreader concept,” Kulka says. “However, I also needed something affordable so I wouldn’t be out a lot of money if it didn’t work.”

Kulka chose a Drop Pro spreader attachment from SnowEx. The spreader holds 14 cubic feet of material and has an auger feed system that drops material in a consistent, 48-inch-wide line behind the spreader. By dropping salt in a tight pattern rather than throwing it with a rotary spreader, the attachment ensures de-icing material stays on the sidewalks and off the grass, Kulka says.

“Going into this, my only expectation with the drop spreader was to kill less grass,” Kulka says. “We did that and so much more.” 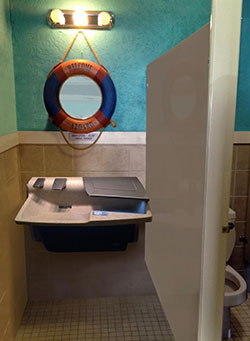