Restrooms have recently become a flash point of controversy over the issue of transgender access. But even without that issue, the desire for greater privacy is influencing restroom design.

In the wake of North Carolina’s “bathroom bill” controversy over the past year, concept designs have been developed that offer “privacy for all, versus privacy for a few,” says Portis. Although more and more facilities have added a unisex family restroom to the standard banks of men’s and women’s facilities, Portis says that a transgender person with no other option might still perceive that as a lesser choice. Also, the family restroom has much less of a presence in office buildings.

“We’re trying to recover from what House Bill 2 did to Charlotte,” Portis says. His firm is based in North Carolina. Under his concept design, two rooms would still have “Men” and “Women” signs by doorless openings, but inside, each toilet would have its own sink and its own door that closes and locks. Toilets and sinks are on the same wall for greater efficiency in plumbing. The potential problems this design solves extend beyond transgender issues. “I’ve got a young daughter,” Portis says, and when he takes her out in public, “I’d like her to have the same level of privacy as anyone else.”

Even without the transgender impetus, Portis says that restroom designs are reflecting greater demands for privacy, such as stalls that go all the way to the ground and ceiling, with “a real door and a real wall.” Such designs are already more common in many European countries and Japan. It’s also important to consider sightlines and mirror placement, to make sure that a passerby in the hallway can’t see into the restroom.

Malarkey agrees that the desire for more privacy is pushing design. In resort-style restrooms, “each individual stall is a room,” with partitions that extend to the floor and ceiling, without horizontal or vertical gaps. But in his experience, a row of unisex restrooms has received some pushback from users and permit departments.

In recent years, two or more side-by-side unisex restrooms have become more common in restaurants and hotels, but the innovation has not yet spread to office buildings.

The design for a bank of unisex rooms can be arranged for efficient piping, but Portis points out that ventilation will be less efficient, if one fan is needed for each toilet. On the other hand, cleaning them involves shutting down only one toilet at a time, rather than the whole men’s or women’s facility. 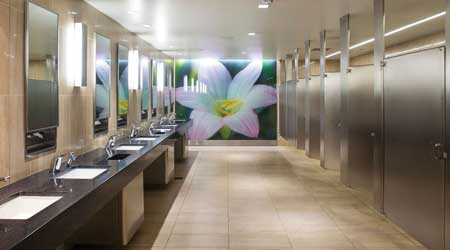 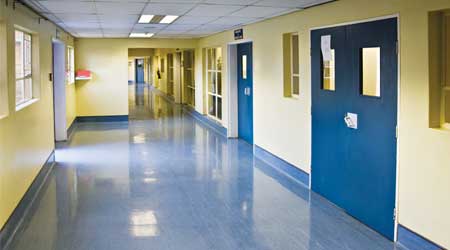