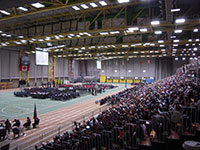 The ballasts in the University of Alberta library’s luminaires were beginning to fail. In retrofitting with new fixtures, the university discovered that a reflective material in the luminaires saved enough energy to pay for improved lighting, campus-wide.

The university’s library project took advantage of Alanod’s MIRO technology, a highly reflective optical surface that reflects up to 98 percent of the light and offers optimal color rendering.

Older T12 luminaires were replaced with T8 electronic technology and specular reflectors. Before the retrofit, the entire campus was mostly lit with two-lamp and four-lamp 1-by-4 and 2-by-4 recessed T12 fluorescent luminaires. Some areas with high ceilings, such as the running track, had HID fixtures.

Two of the larger lighting projects for the university included the Phys Ed complex and Ag Forestry complex. Roughly 4,000 new fixtures were installed in the Phys Ed structure. Early tests show that 2,080,000 kWH are saved from the retrofit as the building went from an energy use of 662 kW to 306 kW. Despite the reduction in energy use, the building saw a 10 percent increase in light levels.

In the Phys Ed’s giant Butter Dome pavilion, with its 60-foot ceiling, the engineering company developed a 5-inch deep reflector shape to work with T5HO and project the light 60 feet. To form the body of the luminaire, engineers used the reflector material in a 0.032 gauge as opposed to the usual 0.02 gauge.

According to Mike Versteege, the university’s energy management program manager, “The fixture design and custom MIRO reflector definitely drives significant savings. Whereas normally you would need two lamps you only need one. We harvest the majority of the light.”

Turtle River Montessori School in Jupiter, Fla., wanted its students to have the best possible indoor air quality. It also wanted to provide it in the most energy-efficient manner. 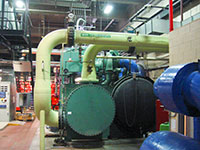