In the area of controls requirements, California’s Title 24-2013 offers some important new and updated requirements that are designed to have a big effect on increasing lighting energy efficiency. Among the topics addressed are multi-level controls, shutoff controls, daylight harvesting controls, and demand response controls. Here is a look at each.

Multi-level controls. As previously mentioned, there are now considerably more exacting requirements for intermediate levels of light and power, and for full-range dimming in the case of LED lamps and fixtures. There are also more limitations as to how uniformity can be achieved in a space. For example, it’s no longer acceptable to switch alternate rows of fixtures or alternate fixtures.

Could you continue to use a multi-lamp fluorescent fixture with two hot legs (black wires) that power it? Yes. But it’s complicated. Full-range dimming automatically meets the code requirements for intermediate levels and uniformity. Most importantly, using full-range dimming equipment allows you to fine-tune the lighting system to provide the exact output needed based on all of the various control strategies — at any time.

Shutoff controls. In the 2013 iteration of the code, there are more stringent requirements for where occupancy controls must be used, and in certain cases, how they must be used. Simple devices such as wallbox occupancy sensors often have methods (such as using DIP switches) to set variables of operation. Such controls typically would not, however, meet the multi-level control requirements for most spaces as previously discussed. Certain room-based systems and most building-wide comprehensive lighting control systems have a wide variety of programming options that allow you to tell the system exactly how to handle the input from occupancy/vacancy sensors, and when – including the ability to dim fixtures instead of turning them full ON or full OFF.

Daylight harvesting controls. Now Title 24 requires automatic control of lights in “primary” daylight zones as well as “secondary” daylight zones, and the determination for what constitutes a “primary skylit” zone has changed.

It’s possible to meet this new requirement using, for example, photosensors directly driving full-range dimmable or even step-dimmed fixtures. But the complexity of making this approach work using circuit-based control devices can be enough to make your head spin. If a comprehensive control system is used and all fixtures are individually addressable, then pairing up fixtures with appropriate photosensors in the correct zones is as simple as “drag-and-drop” in the software.

Demand response controls. In most new construction projects, and certain renovation or retrofit projects, automated demand response (AutoDR) is now required in buildings greater than 10,000 square feet. As with other Title 24 provisions, it’s possible to meet the letter of the law by using circuit- or room-based control devices, connected to equipment that receives an AutoDR signal from an outside source.

Increasingly, comprehensive lighting control systems allow users to designate a URL for the AutoDR signal in the software itself. Then the owner can program the system for desired behavior during a demand-response event. For example, lights can dim by the minimum 15 percent required by code. Or the owner may decide that certain zones can be dimmed to substantially lower levels or shut off entirely. This may provide flexibility by allowing other lighting zones or building equipment to operate with full power. Remember that lights are great candidates for demand-response reductions, because people usually don’t notice changes in light levels until you dim by approximately 20 to 30 percent. 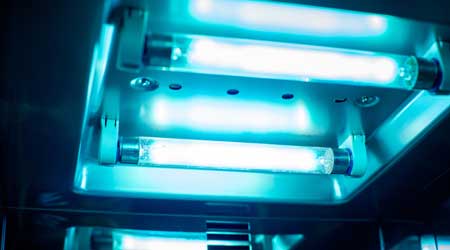