One way to help make your case for an upgrade is to look outside the facility. By benchmarking against similar facilities and finding rebates and incentives, you can make a stronger case that an upgrade makes sense for several reasons.

3. Be competitive! Comparing your lighting energy to similar facilities' can be an important tool in your justification belt, especially if your lighting energy spend is disproportionately high. Simply knowing how your facility compares with others is a powerful motivation to reduce lighting energy. This is true for a couple of reasons. First, especially for central business district multi-tenant facilities, competition is fierce for tenants. So if you're a property manager, and you can show your owner why a reduction in lighting energy makes the asset more valuable in general and more attractive to triple-net lease tenants in particular, you've done the owner a great service. "If you have crummy lighting, and do something even slightly good, it'll improve the asset," says Audin. The second reason is that the tide is turning toward energy benchmarking and disclosure laws. So, as Goulding says, "If the city you're in has a benchmarking law on the horizon, that gives more weight to the justification argument for lighting — and other — upgrades." The last thing an owner wants is to have to publicly disclose a building's energy use, and discover at that time that it's 20 percent higher than the neighbors.

4. Take the free money! Nothing increases ROI quicker than a third-party giving you money to pay for all or part of your lighting upgrade. And so one of the best ways to strengthen a justification argument is to show that you've taken the initiative to secure rebates or tax incentives from the local utility, the federal government, or any other third-party organization that offers money for energy efficiency.

"There's lots of potential money, and you're nuts not to take advantage of it," says Mesh. But as we've learned, CFOs want certainty, so the question often arises about when it's safe to include rebate or tax incentives into the ROI calculation. The obvious advice is to start applying for the rebate very early. "File the paperwork right away," says Audin. "Once you get a commitment letter that says 'yes, if you do this work, we commit to give you X dollars,' then you're good. Until that, you've got nothing."

Goulding says it's often possible to shift the burden for the incentives onto the manufacturer or lighting consultant — that way the vendor takes the risk, if something goes wrong, like money for the upgrade suddenly going away. Goulding also recommends taking advantage of combined-measure utility rebates. "Utilities want broader use of energy efficient equipment," he says. "So to entice people to do more, if you do a singular measure, the utility rebate percentage is X, but if you combine it with more, we'll increase the rebate percentage for both upgrades." That may mean a project suddenly gets a little more complicated, but a more complicated project can also be what it really takes to make large-scale reductions in energy use. 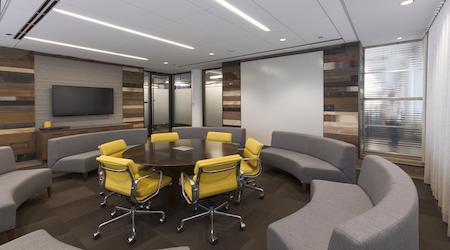