Even with today’s falling energy prices, facility managers are looking for ways to reduce the energy use of HVAC systems. New technologies and improvements in existing technologies are giving facility managers options. While advances can be seen in practically all HVAC systems, some of the most significant advances are coming in three particular areas: variable refrigerant flow systems, rooftop units, and geothermal systems.

Variable refrigerant flow (VRF) systems have been used in Asia and Europe for nearly three decades, but have only recently made inroads in the U.S. In conventional systems, one condensing unit is connected to one evaporator, providing conditioned air to one area of a building. If the system is to supply air to more than one area, ductwork must be added, along with zone controls. While this configuration works, it is not the most flexible or energy efficient, and often results in complaints from building occupants.

VRF systems offer an alternative. In these systems, a single outdoor condensing unit is piped to multiple indoor fan coil units. Refrigerant is circulated in the system through either a two- or three-pipe system. In two-pipe systems, all fan coil units or zones must be in either heating or cooling mode. Three-pipe systems have the ability to simultaneously heat some zones while cooling others.

Because the load on the system’s compressor constantly varies based on the sum of the zone loads, an inverter driven motor is used to power the compressor. As zone loads decrease, the inverter decreases the frequency of the power to the motor, decreasing the compressor’s speed and the flow of refrigerant. As the speed of the compressor decreases, there is a significant decrease in energy use. In constant-flow systems, the compressor cycles on and off as needed with changing loads. Cycling decreases seasonal operating efficiency and increases wear and tear on compressors.

Each fan coil unit connected to the system has its own refrigerant metering device, which is regulated by the fan coil’s control system. As the load within that space changes, the metering device regulates the flow of refrigerant needed to meet that individual load.

Reduced energy use is not the only advantage of VRF systems. With the ability to provide individual zone temperature control as well as simultaneous heating and cooling, better climate control is provided to all areas. With a single outdoor condensing unit, these systems require less installation space than conventional constant flow systems.

The systems are particularly well suited for retrofit applications in older facilities as they decrease the system space requirements and do not require ductwork. In these applications, they most likely are a less expensive option than constant flow systems. There will be increased maintenance costs associated with the systems, such as replacing individual filters and maintaining the condensate drain system, but these additional costs will be more than offset by the savings achieved in energy use.

The systems also are well suited for applications where the load changes during the day due to building orientation or varying operations. The ability to simultaneously heat and cool while meeting varying loads in different zones offers facility managers great flexibility in the design and operation of spaces within their facilities. Changes in operations within a zone generally do not require significant changes to the VRF equipment serving that zone. 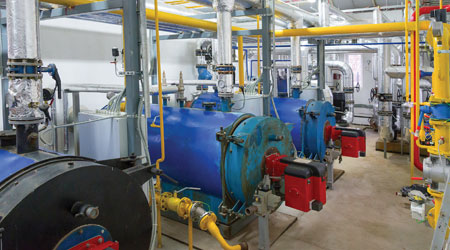