Last of a 3-part overview of VRF systems, advanced rooftop units, and geothermal systems
By James Piper, P.E.   HVAC
OTHER PARTS OF THIS ARTICLEPt. 1: 3 Options for Energy Savings in HVAC Systems Pt. 2: Understanding Rooftop HVAC Units as an Energy-Saving OptionPt. 3: This Page

Conventional heat pumps transfer heat to or from a building to the surrounding air. A geothermal system, also known as a water source heat pump, uses the earth as a source for heat during the heating season and a heat sink during the cooling season. While air temperatures can vary widely during both seasons, ground temperatures remain fairly constant, between 50 and 60 degrees F for most of the United States. These moderate temperatures result in a major boost in operating efficiency of the heat pump systems with their Coefficient of Performance (CoP) between 3 and 6 on a cold winter night. A conventional heat pump would have a CoP between 1.75 and 2.5 when operating under those same conditions.

There are three common types of geothermal systems: horizontal, vertical, and pond. All are closed-loop systems, meaning they circulate an antifreeze solution through a loop that is buried underground or submerged in a pond. Selection of a particular type depends on site conditions, including the climate, soil conditions, how much land is available for installation of the loop, and the size and depth of a suitable pond.

Horizontal geothermal systems run the piping loop in trenches that are typically 4 to 6 feet deep. Plastic piping is laid in the trenches. The piping can be laid in a straight line, or in coils within the trench to provide a greater length of pipe in shorter sections of trenches. Typically, 400 to 600 feet of piping is required for every ton of heating or cooling capacity supported by the system. Depending on soil conditions, a special grouting compound may be packed around the piping to improve heat transfer.

A drawback of horizontal geothermal systems is that they require a large area of land to install the required trenches. They are less expensive to install than vertical systems.

Vertical geothermal systems use vertical boreholes similar to wells with a diameter of 4 inches sunk 100 to 400 feet below the surface. Inserted into each hole are two sections of pipe joined at the bottom by a U-bend. The hole is then backfilled with a thermally conductive slurry material to maximize heat transfer with the piping. Depending on the depth of the borehole, the soil conditions, and the temperature of the soil, each ton of heating or cooling capacity requires between one and two boreholes. All vertical sections are piped into a common manifold that is piped to the HVAC unit. Vertical geothermal systems are best suited for applications where land area is limited. Boreholes must be separated from each other by at least 15 feet to prevent interfering with the thermal conductivity of neighboring boreholes. Even then, the land area the systems require is much less than for horizontal systems. Their primary drawback is the cost to drill the required number of boreholes.

Pond geothermal systems are well suited for facilities with a sufficiently sized body of water on site. Piping is run from the facility’s unit to the pond, where coils of piping are installed in the water. The coils should be placed sufficiently below the surface of the water to prevent freezing, based on the local climate.

Of the three systems, the pond geothermal system is the least expensive to install due to the lack of boreholes and minimum trenching requirements. To be successful, though, the body of water must be big and deep enough to support the system year round.

All three types of geothermal systems have higher first costs than conventional heat pump systems. The reduced energy costs for the systems typically recover this difference in five to 10 years. Applying federal, state, and utility incentives when available will significantly shorten this payback period.

James Piper, Ph.D., PE, is a writer and consultant with more than 25 years of experience in facilities management. He is a contributing editor for Building Operating Management. 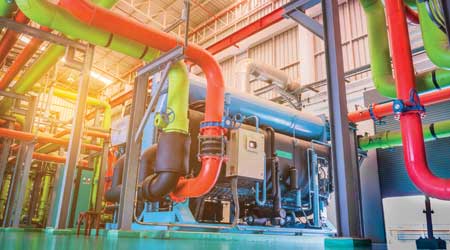