When the Richard J. Klarchek Information Commons at Chicago’s Loyola University opened in January 2008, designers knew the building would be energy efficient. The question was just how efficient. The project team ran two energy models — one, with only regulated loads like lighting and HVAC, estimated the facility would be about 52 percent more efficient than a standard ASHRAE 90.1-compliant building. When both regulated and unregulated loads (including the facility’s 300 computers) were modeled, the facility was predicted to be about 43 percent more efficient.

According to Don McLauchlan of Elara Engineering, based on cost data, the building has actually achieved a little better efficiency than expected. The combined regulated/unregulated model predicted a monthly energy cost of $7,620. August’s bill was $7,333, a 4 percent improvement over the models.

“And we’re still in the optimization phase,” says McLauchlan. “There’s still a lot we can do.” In addition to facility-related tweaks, McLauchlan says IT staff is working to determine how to cut even more energy out of the computers.

Certified at the LEED Silver level, the four-story, 70,000-square-foot building combines a number of design strategies and materials to achieve its high level of energy efficiency. Mechanically operated blinds within a double-skin façade (for passive management of heat flow and ventilation) adjust daylight levels and protect against heat transmittance from the afternoon sun. Special coatings on the glass façade and the shades also reflect heat away from the building. In warm weather, input from an exterior weather station opens automated windows on the east and west façades so breezes from Lake Michigan can cool the interior space. Sensors control and monitor temperature, humidity and carbon dioxide levels inside the building.

Concrete-slab ceilings contain looping tubes for carrying heated or chilled water to cool the building in the summer and heat it in the winter. The facility also has an underfloor air distribution system that supplements the radiant heating and cooling. A green roof helps keep the building cool while also absorbing rainwater, preventing runoff into the lake. 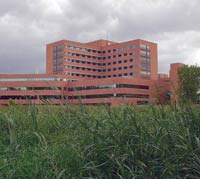 Hospital Gets a Handle on Emergency-Power System

Methodist Hospital, one of the nation’s top 100 hospitals, wanted to precisely track priority loads to ensure its emergency-power system could handle the extra demands of a power outage and expanding load priorities.

Pace University is one of the largest universities in New York, and its data center houses mission-critical servers, mainframe computing capabilities, and networking and telephone applications

With HVAC units in just about every room, the 825-bed Mater Dei Hospital in Malta, the state-of-the-art hosptial had a complex water system. The last thing the hospital needed was for the system to increase the risk of patients becoming sick.