It doesn't take a major crack in a building's envelope to compromise energy performance from air leaks or incur structural problems from water seepage. In fact, small details add up — a facade system that the manufacturer believes to be watertight (but isn't), small holes in the moisture barrier, or flashing lapped the wrong way, or a thermal break at the end of a beam. Once the building is occupied, problems arising from water and air infiltration are hard to pinpoint and expensive to fix.

The reason commissioning is needed is that the construction administrator, however diligent, can't ensure that every detail is constructed as designed because construction activity is continuous between site visits.

Also, while energy modeling is effective for predicting and measuring general systems performance — walls, roof, windows — it is not as effective for identifying the anomalies in the connections between those systems. Energy modeling unrealistically assumes that these connections tightly abut, without any space for air or water to infiltrate the building. As a result, when unconditioned air breaches the thermal barrier at the connections, the load on heating and cooling systems increases, and infiltration of cold air creates the potential for water condensation.

Building envelope commissioning begins in the documentation phase. The project team of architects, engineers and building-performance specialists examines construction document details to look for connections that may be conduits for thermal transfer or interruptions to the moisture and vapor barrier systems.

When the project team examined design details for an incubator lab and academic facility at Northwest Missouri State University's Center for Innovation and Entrepreneurship, they found some select points of potential thermal transfer at areas that weren't readily visible in the standard set of construction details. These included the end of beams at the connection between the top of a wall and the roof, as well as steel wall framing at connection points to sun shades.

Using building information modeling (BIM) software, the team was able to examine the points of thermal breaks through enlarged, three-dimensional construction details. This helped to identify alternative ways of forming the connections to eliminate thermal breaks. BIM is also excellent for "clash detection analysis" — identifying where mechanical, electrical, plumbing, and structural systems might clash with one another.

Although the design of the walls was not inaccurate, the cumulative effect of small, uninsulated cavities at normal connection points showed the potential to decrease energy performance. The solution was simple: Spray insulation into these points during construction.

Field-testing of mock-ups and as-built wall sections is another avenue toward the integrity of the building's envelope. Mock-ups have been performed for years, mostly as models for aesthetic and/or workmanship standards. For building-envelope commissioning, mock-ups can be used to model proper construction methods for contractors.

For building envelope commissioning, a mock-up for field testing should be specifically designed and constructed to compress all of the potentially problematic details of the building's envelope systems and their interconnections. For example, a foreshortened wall mock-up might include a window, a corner of two walls, a roof section, and a sunshade that penetrates the wall. 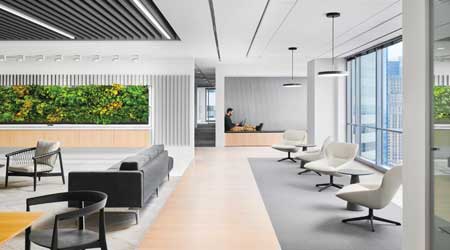 Getting Creative with Creating Outdoor Workspaces