When asked to prepare the 2013-14 Operations budget, Darin Hargraves, the director of Maintenance and Operations, was asked to reduce custodial employee cost by $2,000,000 and custodial supplies and equipment budgets by 20%. By developing a strategic methodology to the budget and staffing reduction process, Mr. Hargraves and his team were able to reduce the department's overall budget by 13% and still preserve a high level of cleanliness in ASD school facilities.

Key to the process was the development of Key Performance Indicators (KPIs), one of which was an in-depth assessment of current Performance Levels.  Multiple surveys were conducted at each ASD facility to determine the APPA Cleaning Level score for each of three user groups:  principals, teachers and Operations managers.  This allowed for the assessment of perceived performance from multiple perspectives and “stake-holders.”  Other KPIs assessed were:  Cost-per-Square-Foot, Custodial-Workload and Cost-per-Student.

The KPI assessment tool, developed by the Operations team, had the ability to plot schools by comparing KPI into quadrants.  By manipulating staffing and other variables, school KPI could be plotted and evaluated.

Limitations to adjusting cleaning staff in each school facility were: the location of each facility in respect to available workers and other ASD facility locations (ability to share workers), and the logistics of having to staff in half (.5) FTE increments. 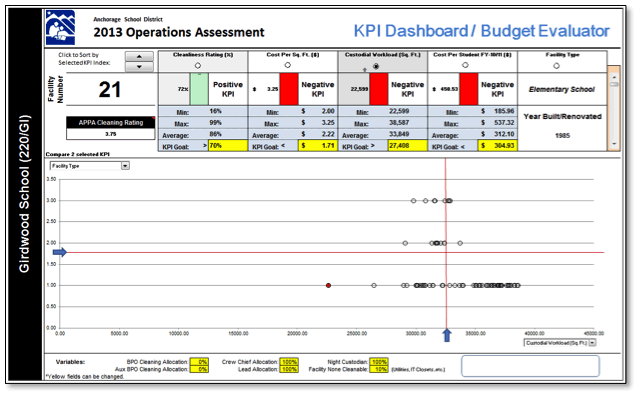 The tool was also able to generate a report to summarize the savings of each cost cutting scenario considered.  Four cost cutting scenarios were evaluated but only three were ultimately adopted and combined into one report.  This report was reflected in the budget submittal which was submitted for School Board approval.

As a result of adhering to a strict methodology, Operations gave 110% of what was required--$2,195,110.10 in labor savings.  The efforts of the Operations team saved an additional two teaching positions as a result of going the “extra mile” through prudent and equitable resource allocation.

Day cleaning was also piloted at three schools to determine if energy savings could be realized.  A survey of teachers and administrators in the school showed the program had an acceptable impact to teaching and there were savings realized through reduced electric and gas charges.  The district spends nearly $15,000,000 annually on energy related utilities.  Day cleaning reduce utilities costs by nearly $10,000, per school, per month.