Poor water quality and malfunctioning valves are two of the biggest culprits for sprinklers not working properly. Here's how to avoid these two issues.

Once a sprinkler system is in place, an adequate amount of water must always be available for the system to be effective. This is critical for several reasons, Dellasanta says. To start, the water is needed to contain and control the fire. In addition, the water flow from a single sprinkler also activates the fire alarm system, letting occupants know they need to get out of the building, and notifying the fire department. “The sprinkler activates first, and water flows through the pipes, which activates the water flow switch connected to the fire alarm system,” he adds.

In many locations, sprinkler systems are fed by the municipal water supply. The level and quality of this water can vary, says Milosh Puchovsky, professor in the department of fire protection engineering with Worcester Polytechnic Institute. The pipes may degrade or corrode or some sort of aquatic life may infest the water supply. In some areas, poor water quality increases the rate of corrosion. “Any of these can decrease the level of water flow or pressure and could impact the performance of the sprinkler system,” he says. Building owners and facility managers should keep tabs on any changes in sprinkler system water supply. One way to do that is to conduct a main drain test at the system riser, Puchovsky says. In this test, the main drain valve is operated to flow water from the supply. NFPA 25 has more details on the test method, as well as the required frequency.

For the water to reach the sprinkler heads, the valves on the system need to be open and functioning properly. Closed valves are a main reason for system failures, Duffy says. This can happen if they’re turned off during a renovation or repair work and not turned back on.

Control valves should be indicating valves, Puchovsky says. That is, the valve itself should let an individual know, just by looking at it, whether the valve is open or closed.

“You typically also should have some level of supervision on any valve controlling water to the system,” Puchovsky adds, pointing to NFPA 13. It says, in part, that valves connecting to water supplies, as well as isolation and other valves, should be supervised by one of several methods. “If the sprinkler system is mandated by building or fire codes for life safety, then these regulations typically require the use of a tamper switch,” he says. If someone attempts to close the valve, this movement is sensed by the tamper switch, which then initiates a supervisory signal to the fire alarm control panel, so that the cause can be investigated and appropriate action taken.

When a valve has to be closed for renovation or repair, it’s essential to alert the relevant people, Dellasanta says. Typically, this will include facility managers and engineers and the fire alarm monitoring company. The fire department should also be notified, so they can be prepared if a fire should occur when the system is impaired.

“Have an impairment plan in place, just in case something goes wrong,” Dellasanta says. This should contain such information as who to call in an emergency, the relevant fire department, and the contractor performing the work.

In addition, if a control valve in the water supply to a sprinkler system is closed for any reason, NFPA 25 (2017 edition, section 13.3.3.4) requires that once the valve has been reopened, a valve status test be conducted to verify that water is flowing into the system, Duffy says.

For a sprinkler system to do its job, it has to activate when the fire is small, Puchovsky says. The water works by cooling the reaction zone around the fire, and wetting surrounding materials so they require more energy to vaporize, he adds. Delays in the sprinkler activation can allow the fire to grow, making it harder to contain.

Dust and debris can delay a sprinkler’s response in a fire or keep it from discharging water at all, Duffy notes. Or it can change the discharge characteristics, shifting the path of the water from the sprinkler head, so it doesn’t hit the fire, he adds.

To ensure the sprinkler heads are unobstructed, building owners or facility managers should regularly inspect them. If a sprinkler head is inadvertently painted, or if debris is caked on, it usually will need to be replaced, Puchovsky says. “You can’t just clean it off.” 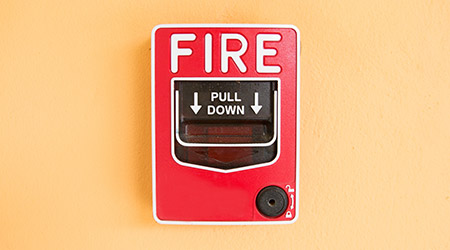