Jim Allen's Facility Manager Network has allowed him to work towards one of his biggest goals: Creating a facility condition index for Los Angeles County.

By Desiree J. Hanford
Facilities Management
OTHER PARTS OF THIS ARTICLEPt. 1: The Collaborator: How the Facility Manager Network Builds ConnectionsPt. 2: This PagePt. 3: How to Overcome "This Is How We've Always Done It"

The seeds for the Facility Managers Network were planted during an executive leadership development program Allen took in the second half of 2014. The County of Los Angeles partners with the University of Southern California to institute the programs, which help develop county managers so they can take on increased responsibilities and advance their careers. Allen participated in one of the program’s first cohorts. 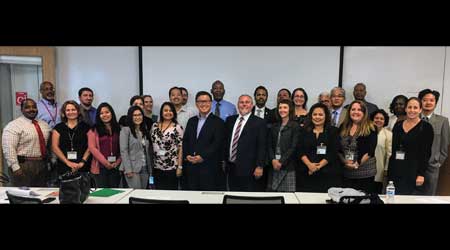 (The Facility Managers Network, pictured here in a July 2017 meeting during the Los Angeles Clean Tech Incubator at the La Kretz Innovation Center campus,  meets every other month. During the pandemic, meetings have been carried out via video conference.)

“I saw this huge gap in the county, something I saw based on my experience,” Allen says. “And so we developed (the network) in the program’s environment. Out of the 20 programs that come out of the executive leadership development program, the County of Los Angeles CEO decides which programs to implement and our team had the first program that was implemented by our CEO.”

Allen describes himself as “quite over the moon” that his cohort’s program was given the green light to be implemented.

“Obviously as a manager and leader, I'm very passionate about what I do,” Allen says. “Starting out in the County of Los Angeles as a journeyman electrician when I was hired and moving up through the organization, I recognized this gap at multiple levels. And then becoming an executive in the county, it was one of my goals to say, ‘Hey, we've got to figure out a way between our central executive office and these 37 departments to work more collaboratively and support each other.’”

Network is one piece of asset management branch

The Facility Managers Network was one initiative of a multi-stage program in developing the Asset Management Branch. Although he wasn’t in charge of the Asset Management Branch, Allen was also a contributing county executive to two other critical elements for it: facility maintenance standards and a facility condition assessment. Allen chaired the standards subcommittee. Los Angeles County had maintenance standards, but Allen says they were from 1993 and needed to be updated and developed.

That work led to the countywide facility condition assessment, Allen says. A consultant from AECOM was hired and the team worked with that individual for five years to do facility conditions assessments in what Allen describes as a “very structured way” throughout the county-owned 4,000 facilities. The departments had to put much time and effort into walking around with architects and engineers and providing access to a variety of areas, including secure areas in hospitals and jails, Allen says.

By being one of the first initiatives, the Facility Managers Network encouraged participation in the maintenance standards development and set the stage for the facility condition assessment to be done and supported by departments, Allen says. The network established an opportunity for success that might have been much harder to achieve had there not been an understanding that everybody brings value to the table in each department, regardless of size, Allen says.

“Health services, which has 25,000 people, and Military and Veterans Affairs, which has 50 people, are equally as important and have a program to deliver and so they can participate,” Allen says. “So I think the Facility Managers Network really set the stage for the opportunities for success for the larger facility condition assessment and the Asset Management Branch.”