Part 2 of a 3-part article exploring how deep energy retrofits can dramatically cut energy use.
By Ronald Kovach, Managing Editor   Energy Efficiency
OTHER PARTS OF THIS ARTICLEPt. 1: Innovative FMs Look To Save 40-50 Percent on Energy With Deep Energy RetrofitsPt. 2: This PagePt. 3: SIDEBAR: Two Financing Options for Deep Energy Retrofits

Several real-world examples show the value of deep energy retrofits. In California, Kevin Bates, who is president of Sharp Development Co. and is educated in sustainable construction, took on a single-story, 1970s office building of 30,000 square feet that was described as “dark, dingy, derelict, and unrentable.” The structure, in Sunnyvale, Calif., had uninsulated concrete walls, a wood roof, and single-pane windows.

“The whole driver here,” says Bates, “was to see if we could take an old concrete tilt-up building — of which there are millions and millions of square feet in Santa Clara County and Silicon Valley — and renovate it to net zero energy, carbon neutral, with a very strong emphasis on the health and wellness of the interior environment for its occupants, including air quality, natural light, natural air exchange, enhanced connectivity to nature, really strong acoustics, those kinds of things. If we could prove we could do that with more profitability than the less expensive way of renovating just to meet minimum code, then that would be a real game changer.”

Bates says it took him three months to convince the ownership to let him do all that to their building. “It had to work economically,” he says.

Among the many elements that cut his costs were creating an open space office design, greatly reducing the tonnage of equipment, and making systems accomplish multiple purposes. Electrochromic glass, for example, keeps out heat and glare, works effectively with the BMS, and eliminates the need for blinds, thereby giving occupants continual connectivity to nature. The “ceiling upholstery,” which uses acoustical fabric panels found in movie theaters, absorbs about 92 percent of ambient sound, has reflective capabilities that spread light effectively, and is strong, fire-rated, and attractive, leaving the woodbeam structure exposed but covering the insulation.

But has Bates’ ambitious makeover been profitable? A big software company quickly leased the improved space. At that point, the average time an existing renovated building sat on the market in Sunnyvale was 18 months. Bates’ building leased in just three months, he says, despite a lot of competing building stock.

Further, Bates says, “The additional cost of what we did versus the standard meet-the-code retrofit was $49.84 a square foot more. With the rent and downtime and savings and interest and all those kinds of dynamics, when we applied a 7.5 percent cap rate we paid that additional $50 a square foot and picked up an additional $73 a square foot of value.” 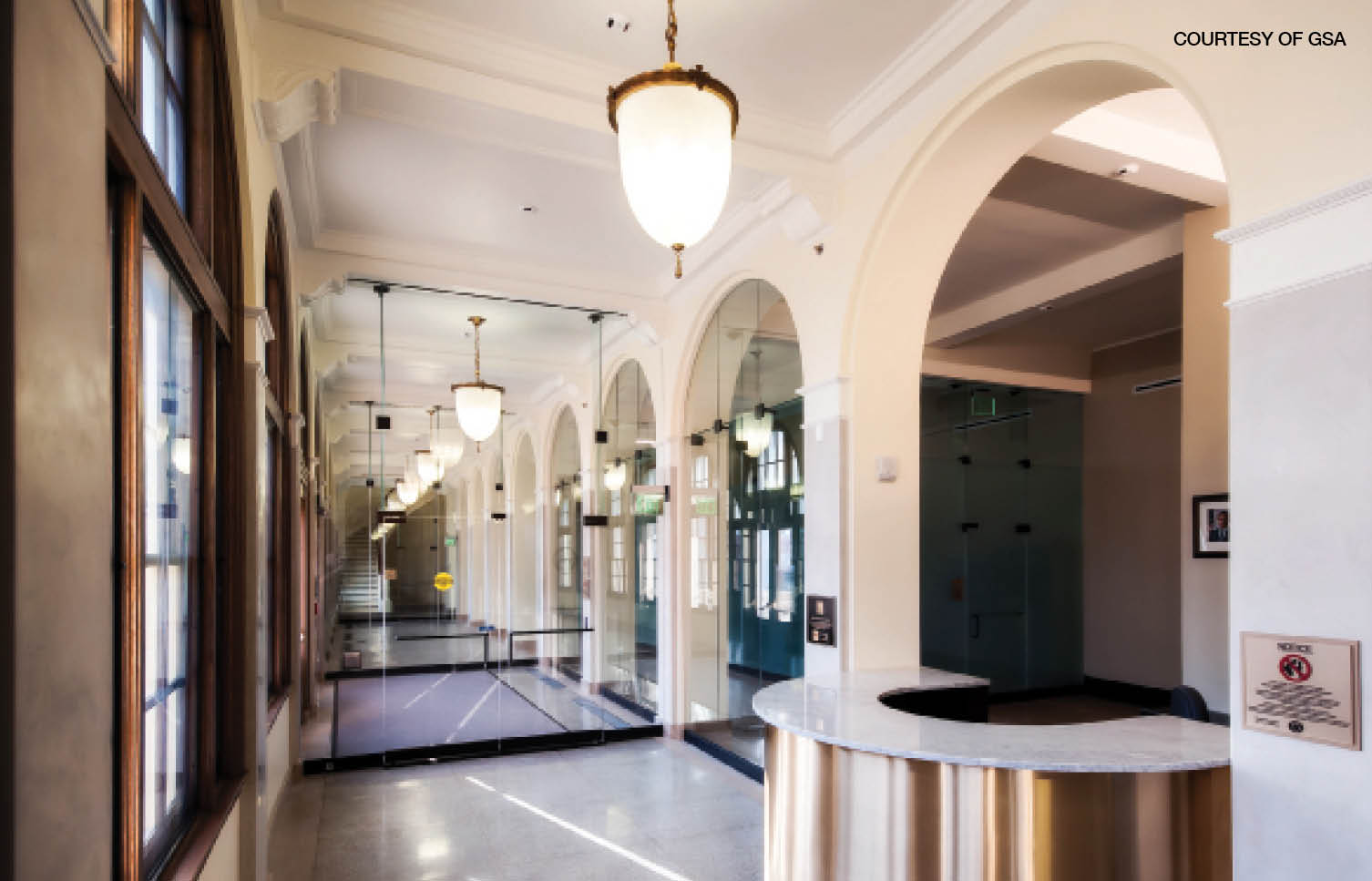 The whole process is hard, he allows, and takes more time than a standard retrofit. “But the payoff,” he says, “is you differentiate yourself from everything else on the market. I think where it will really show its colors is when the market is depressed — I think you’ll stay leased when other buildings are struggling.”

The biggest consumer of energy at Carrollton was the data center, so all the refrigeration units were replaced and the operating parameters brought up to date. “Data centers don’t need to be cooled the way they were when computers were all made with vacuum tubes,” Kampschroer says. “If you go into a data center and it’s cold, then you’re wasting energy.”

Kampschroer says GSA’s big lesson learned involves critical thinking. “When you’re talking to the engineers and the other people, I would just keep asking questions — ‘Why aren’t you looking at this? Why aren’t you look at that?’ If you don’t see (a plan) that is so comprehensive it’s mind-boggling, then I think people are leaving stuff on the table. That’s been a big lesson for us, that it’s not just our facility managers that need to be aware of what’s possible, but everything we do with the companies we hire — and they’re used to doing the easy stuff. They’re not used to these deep energy retrofits.”

It’s not inevitable that deep energy retrofits cause major disruption to a building, though that potential exists. Much of it can be minimized by covering everything up after tenants leave and doing the work at night, or by doing a floor at a time.

With deep energy retrofits, “really nailing the project plan” is important because it lets you finish the project “as quickly as possible in the most logical way,” says Kampschroer.

Bendewald says facilities are missing many smaller, lighter retrofit opportunities with short payback periods. First do the basics, he says, such as installing the right controls and equipment, including variable drives in HVAC systems and LED lighting.  In other words, the complex analysis for a deep energy retrofit is not needed to arrive at the conclusion that, for example, lighting and HVAC measures make sense. “You can just do the lighter retrofit first and capture those savings, while at the same time installing the energy monitoring instrumentation/controls to track your energy use in a relatively sophisticated way,” he says. Once facility managers have proven to their boss that energy efficiency has a good payback, they can use the energy data they collect to later streamline the deep retrofit process and strategize more significant energy-saving interventions, he says.

Email comments and questions to ronald.kovach@tradepress.com.