Part 2 of a 2-part article offering tips and advice for how to apply for and receive rebates for energy efficiency upgrades from utilities.

By David Lewellen
Energy Efficiency
OTHER PARTS OF THIS ARTICLEPt. 1: How To Make A Better Case For Energy Upgrades With Utility RebatesPt. 2: This Page

Facility managers should consider these tips on how to cut risk in getting utility rebates. That's because, if a reward is going to be the deciding factor in whether to do an improvement, that should be seen as a risk. Audin says that during the 2008-’10 recession, some states cancelled contracts. “There’s always some risk with a rebate,” he says. 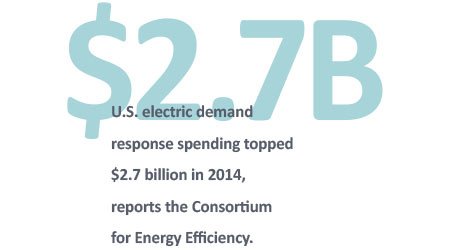 A main consideration is that a utility may want to see results — in terms of energy savings — before it cuts the rebate check. For example, if the upgrade is changing out one type of lighting for a more efficient kind, it’s easy to multiply the number of fixtures by the difference in watts and know exactly how much energy will be saved. Systems designed for more efficient heating, however, might have to go through an entire year before a manager can show actual savings. Audin says some utilities will pay half of a promised rebate up front and half after verification.

Most incentives contain a clawback provision if the project isn’t completed or doesn’t perform up to standards, but Audin says he’s never seen one fully enforced — although once in a while it does happen that less than the agreed-upon sum is paid out if the savings don’t materialize.

“Proceed with caution when you’re counting on an incentive,” says Robertson. He tells a story of a university that spent millions on a co-generation system based on the promise of a favorable rate from the utility — but that rate was eliminated around the time the system came online. “No one asked that question” of the utility, he says.

Bloom says that in his experience a “minuscule fraction” of expected rebates don’t come through. It’s usually easy to figure out what happened, he says; he remembers a case in which the customer, the vendor, and the utility were all aware of a $250,000 incentive, but everyone thought that someone else had filed for it. In the end, he says, his firm was able to get the money for the facility.

“Get an agreement up front about what you’re going to do and what they’re going to pay,” says Steve Kimsey, senior energy consultant at Energy Ace. Asking retroactively for a rebate has less than a 50-50 chance of success, he says. “There’s no reason not to get it up front.”

Getting Support
According to Robertson, hiring a consultant simply to get a rebate is usually not efficient, although in the context of a full energy audit it would make sense. Kimsey says about half of end users file for the rebates themselves, particularly if they have a good relationship with their utility.

Finding good rate offers can be complicated, but Lubinski says it’s not usually necessary to hire a third party to look for them; utilities can call up a customer’s data, analyze it, and discuss options. Bloom says a third party is particularly helpful with a complex project to make sure that everything is filed correctly. 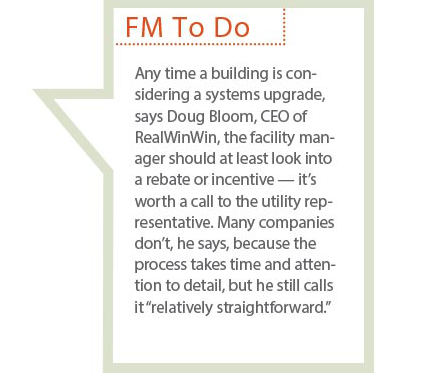 “Make a friend of your electric and gas representative,” Robertson says. “You should be on a first-name basis.” Knowing a person to call and ask questions will produce much better results than relying on information from a utility’s website, he says.

A utility is willing to reward customers for using less of its only product because it hopes to avoid the enormous cost of building new power plants. Historically, that has taken the form of rebates and incentives, but Ellen Franconi, a principal in building systems practice at the Rocky Mountain Institute, thinks the landscape could change in the next few years.

As data analysis becomes more sophisticated, she says, utilities will be able to see exactly how much (or how little) energy a given improvement saves, and reward the customer accordingly, as a measurable market develops for efficiency. The passage of California’s Clean Energy and Pollution Reduction Act in 2015, she says, points the way for that state’s utilities to “close the information loop” and “build a better case for efficiency” —  and changes in California tend to spread to the rest of the country. Being able to measure the true impact of improvements will allow both suppliers and end users to make better decisions, she says.

What Bloom expects to see is that “the grid will get very smart from the meter out.” But, he adds, some companies are developing and deploying sophisticated analytics to determine how energy is used within the building, without employing an internal energy management system. n