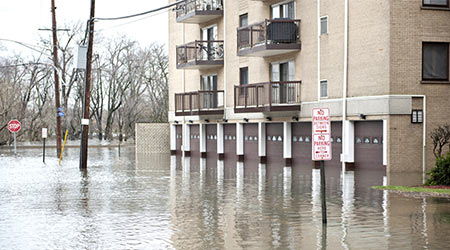 Flooding challenges the best-laid plans of institutional and commercial facilities. Add the complications posed by a major winter snowstorm, and maintenance and engineering managers in these facilities more than have their hands full. They can be facing a full-blown catastrophe. The bomb cyclone has brought this combination of natural disasters to facilities from the Southeastern United States all the way north to Maine.

The recent East Coast blizzard pushed tidal flooding to levels not seen in four decades, with Portland, Maine, recording the third-highest tide since weather officials started keeping track more than 100 years ago, according to an article in the Portland Press Herald. Flooded buildings and piers were reported all along the Maine coast, from Kennebunkport and Wells to as far east as Machias.

John Cannon, a senior meteorologist with the National Weather Service in Gray, says the high tide in Portland was 13.79 feet, slightly below the 14.17 feet reported during the infamous blizzard of 1978. The second-highest level, 13.98 feet, also happened in 1978. Cannon says sea levels already were high because of the nearly full moon, and the storm surge only made things worse.

In Portland, flooding occurred on piers near J’s Oyster House, on Somerset Street near Whole Foods and on Marginal Way near Diamond Street, says Jessica Grondin, a city spokeswoman. City officials advised motorists to turn around rather than drive through standing water. In Scarborough, high-tide flooding closed Route 1 near the Scarborough Marsh for about an hour, closed Sawyer Street near the Cape Elizabeth line for a short time and also flooded a private road, says Deputy Police Chief Marla St. Pierre.

Learn about restoring and repairing HVAC equipment after a flood

Throughout coastal Maine, many roads were closed or blocked off. In some areas, police kept drivers from trying to cross flooded roads. The biggest threat of flooding was at high tide, or around 12:30 p.m. in coastal York and Cumberland counties. The next high tide was to occur after midnight, but Cannon says he didn’t expect a major impact because floodwaters will have largely receded by then.

“One concern is that this could leave us more vulnerable for the rest of the winter, particularly if another extreme storm hits,” he says.

About a month before the highest tide on record in Maine in February 1978, another major storm hit. Cannon says that storm significantly weakened some protective barriers along the coast, which made the February blizzard that much more catastrophic.

“That could certainly happen again,” he says.