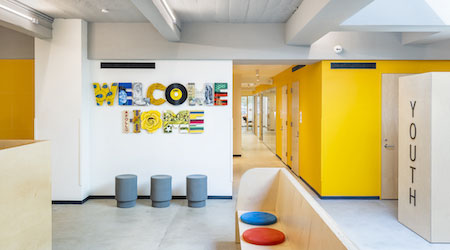 From upgrading bathrooms to meet ADA to adding skylights for natural daylight, the facility's renovation improves its ability to serve the community.

It was a building in dire need of attention. Located in New York City and serving those in East Harlem, the Washington House Community Center (WHCC) had remained basically untouched for over 70 years, says Kristine Cooper, director of development and communications for Union Settlement.

Since its inception in 1895, Union Settlement has provided residents of that community with a range of programs and services designed to give them the tools necessary for success, such as early childhood education, youth programs, and college readiness as well as mental health counseling, small-business development and senior programs. Union Settlement serves 10,000 residents annually through over a dozen East Harlem locations. One of these is WHCC, which provides the “hub” for the youth services and senior services programs.

As she describes it, the facility did seem fairly grim. Built in the 1950s, the hallways were narrow and dark, the lighting was inadequate, the entryway with its steel door was unwelcoming. The barred windows were broken and falling apart. There was no natural ventilation. The six bathrooms, all of them original, were not ADA-compliant, and the internet connection was unreliable. All in all, says Cooper, it was neither a warm nor welcoming environment, one that would inspire learning, growth and community involvement.

But that has changed, thanks to a grant of over $2 million obtained through the Manhattan DA’s Criminal Justice Investment Initiative (CJII) and to a collaboration with Andrew Franz, founding principle and design director of New York City-based Andrew Franz Architect, which undertook the center’s anticipated redesign.

The chance to make a difference was exciting, says Franz.

“We had never done a project like this before,” he says. “We’ve done smaller projects but not one of this size and in a financially challenged area. Those in the center were working hard to deliver services to an underprivileged community and were hindered in some ways by the building’s condition and appearance. We saw this as an opportunity to change the narrative and to help establish a real sense of pride by giving the community a beautiful state-of-the-art facility.

“We also wanted to help the center address the issue of attracting talent, inspiring those who want to serve and work in the center, and to let those people feel more worth about what they’re doing and where they’re working,” Franz continues. “We wanted to give them a happier and healthier place to work.”

Andrew Franz Architect was first awarded the contract in spring 2019, says Franz. A year later the COVID-19 pandemic struck, posing a “real challenge” to the project’s momentum. Construction began around July 2020 as the city was starting to open up again. Crews were smaller, masks were donned, and in September construction was in full swing. By the summer of 2021 the center threw open its doors, a bit later than planned because of supply chain disruptions and lower capacity on the worksite which slowed the pace, but still just 18 months after receiving the go-ahead.

The pandemic aside, the building’s original design and condition also presented some issues, hence the need to undertake a complete gutting.

“The old building was a dark maze of rooms and doglegs,” he says. “We made it so that now, people are always looking through windows. When they traverse the center, whether walking down the east/west corridors or the north/south corridors, they’re always looking at natural light.”

“These were essential in modernizing the public spaces and various function rooms, including the relocated library, new kitchen, education center, classrooms and computer labs, plus the senior center by the entry lounge, offices and services, all of which support Union Settlement’s ability to serve its different constituencies,” Franz explains.

Working within budget constraints — the total allocation was about $2.5 million, says Franz — was another factor, inspiring a “do more with less” approach. They introduced lots of glass, opening up what was previously solid brick masonry on the outside south-facing wall, integrating walls of glass, including a glass-clad entryway, which was enlarged and made more accessible. Skylights were used for natural illumination. They removed the old linoleum and vinyl flooring and rather than replacing it with something similar, they kept the concrete flooring underneath, polishing and finishing that instead.

“We got rid of the bars on the windows and the solid-steel front door, which made it feel as if you were entering a prison,” Franz says. “We focused on bolder gestures, spending on items that would provide more bang for the buck. All of the renovations and materials chosen are safe, nontoxic and we included energy savings where possible.

“The most important thing was to introduce materials that felt of higher caliber. We wanted nicer finishings, lots of color, playful elements and lighting that was diverse and created different effects. We tried not to have the space feel institutional.”

“We were hoping to revitalize the space to fit the functionality of the program and the youth and senior participants,” says Cooper. “We wanted a design that would spark joy and energy. A place where youth and older adult participants would thrive, a place with more natural light, better flow, open space and a welcoming environment.”

And that desire was realized. The hard-to-find, dark opening was transformed into an enlarged, glass-clad entry that extends a more hospitable invitation to the community, encouraging them to come inside. All six bathrooms are now ADA-compliant. An expanded reception area is infused with natural lighting from the skylights and opens up into an airy and bright multi-use space with fun furnishing and bleacher-style seating. Colorful art and a large mural also adorn the walls, some featuring works from local artists such as Kristy McCarthy, whose mixed-media installation “Welcome Home,” is located in the reception area.

At the same time, reducing energy costs was another objective.

“The new efficient circulation with glass-enclosed rooms allow for views between key programs, more natural light and enhanced connections to the outdoors,” says Franz, adding that many of the views from the space look out on a parklike setting and trees, a rarity in New York, especially in underserved areas. “A new and efficient HVAC system and high-performance windows add to the center’s high energy efficiency.”

“There is so much natural light throughout, beautiful murals and artwork which makes it a great place to learn, grow and work,” she says. “A favorite location of the youth services participants is the stadium seating in the lobby.

“We learned through strong partnerships between the general contractor, architect, artists and muralists what is possible,” Cooper says, speaking of what the project taught her. “We look forward to continuing to beautify our spaces for our participants.”

And what did Franz take away from this effort? Well, in addition to figuring out how to deliver during a pandemic, he also learned that a big budget isn’t always necessary, and that “well-selected gestures” can deliver an entirely oversized impact.

Pamela Mills-Senn is a freelance writer based in Seal Beach, California. 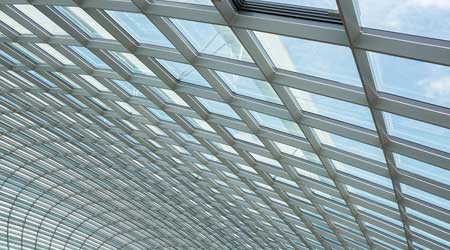