In many organizations, IT and FM constantly butt heads. But Smith has been successful because he understands the IT point of view.

Taking data center management out from under the general umbrella of facilities management avoids the problem of having mission critical facilities competing for attention with less urgent matters, says Smith. For example, in a first-in-first-out approach to handling maintenance calls, the HVAC team might attempt to fix isolated cooling problems in various parts of the facility before dealing with an air-handler problem on the raised floor of the data center. But if the air-handler is not fixed promptly, the data center will likely lose a cooling unit, which will have the result of knocking IT equipment offline. “Your impact scope for a series of unrelated events becomes very large very quickly, because your focus is more spread out,” Smith says.

The fact that Smith operates within IT helps him develop a cooperative climate in which FM and IT can help each other succeed.

In a lot of organizations, IT and facilities management butt heads more often than they cooperate. In those cases, it’s up to the facility manager to bridge the divide, Smith says. “You ultimately just have to be the bigger person. You have to walk across the hall and say, I want to come to your staff meeting, I want to find out what’s going on, I want to be able to help you because if you’re successful I’m successful.” In other words, rather than expecting information to come to you, sometimes you have to seek it out.

One reason Smith has been successful is that he understands the IT point of view. For example, he accepts that IT often doesn’t really know what equipment it will be buying until a week or two before the equipment arrives. “They’re often dealing with a couple of different vendors,” Smith observes. “One will come up with a solution that sounds fantastic and they’re getting ready to buy it, and then another one will show up with an even better solution or a better price on a similar solution.” As soon as the order is placed, the facility manager needs detailed information about the power and cooling requirements of the equipment that will be arriving.

Smith’s biggest challenge is planning long-term growth in a rapidly changing environment. Increasing capacity takes time. Smith and his facility team must be as prepared as possible, within tight cost-control parameters, when it becomes necessary to grow the operation. Smith looks at how the data center load has grown to determine how much growth is typical in a year. “Then you can begin to project that out,” he says, to determine when new capacity will be needed. “It takes at least a year and a half to two years for a big expansion. You have to start at that end date and work your way back.” He sees his mission as keeping an eye on costs while “shortening the build-out curve and increasing the speed to market.”

Keeping upgrades and expansions on track isn’t easy. “A lot of times you don’t get the money for upgrades or expansion on schedule,” Smith says. In those cases, he says, “it’s important to be the voice of reason that keeps the justification for the expansion or upgrade on everybody’s mind.” Doing that means walking a fine line: not being a doomsayer, but also not letting work be delayed so long that there’s an outage.

One way Smith maximizes capacity is by handling responsibility for the placement of IT hardware inside a data center or other facility. “It is an elementary procedure, but if done incorrectly or taken lightly, the end result could be disastrous,” Smith says. When rack and stack is done by everyone, equipment is arbitrarily placed. The result is a loss of capacity and the ability to profile a room — creating areas for network, servers, and the like. Improper rack and stack can also result in overloading power strips and unintended outages.

Neatness is very important as well, in the structured cabling, so that repairs can go smoothly down the road. For this reason, Smith’s teams install and plug in the equipment at every facility. He limits the number of people who are in areas where data is housed, which lowers risk and facilitates a better overall operation. In this way, those who are doing network or telecom engineering or working on the server or infrastructure can focus on their core jobs, which do not involve putting equipment in the rack.

“We manage the types of materials that enter and can stay in the room. The overall standards for installation and structured cabling are much better managed when implemented by a smaller group reporting to the same leader,” Smith says. 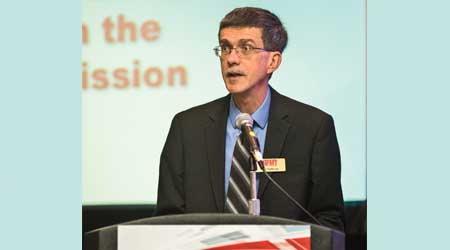