While renovating a data center may be less expensive than building new —although this isn't a given — it's still not unusual for costs to climb into eight or nine figures. Once the facility manager has identified the goals of the renovation and the work required to achieve them, it's time to start crunching the numbers. It's best to work with experts to establish a realistic, thorough budget upfront.

"What will it take to get to the data center that will support the organization for the foreseeable future?" Evanko asks. While it makes sense to address this question before beginning any actual construction work, doing it too early in the process — say, before all the work that actually needs to be done has been identified — is apt to lead to inaccurate estimates.

In addition, a thorough, detailed plan of the process should be drawn up. Every party that can reasonably be expected to see an impact from the renovation should weigh in, Lehman says. As a starting point, the facility manager should consider involving IT, any contractors, legal, the operations folks, finance and logistics.

The level of detail required in staging a renovation can be staggering, Evanko says. For instance, just raising the floor from 18 to 36 inches may take a half-dozen phases in order to maintain production throughout the operation. Managing the electrical, water and mechanical systems through the process becomes complicated. To ensure that the operation goes off smoothly, each step needs to be outlined.

A sure recipe for disaster, according to Johnston, is relying on before and after pictures from the engineer, who then leaves it up to the contractor to figure out how to get from Point A to Point B. "You have to figure out all the steps and the temporary tie-overs. You have to make it work on paper before it has a chance of working in the field," he says.

Also critical is an inventory of the data center equipment, says McFarlane. This means identifying each piece of equipment, as well as its logical and physical dependencies. This usually is a huge undertaking, and one that's often outdated by the time it's complete, he acknowledges. Even so, embarking on this challenge has value. While software programs are available to help with the process, it often is at least partially manual.

As part of this effort, look for redundancy, Johnston says. In other words, look for places where it's possible to get into the existing systems and to make connections without causing outages. These "back doors" provide ways to move applications from existing to new systems. Similarly, the project leaders should assess the value of bringing in temporary backup generators or chillers to use during the construction.

Facility managers also need to plan for enough time and resources to test the systems, Johnston says. The testing should occur in several stages. First is making sure the power systems are sufficient. Next is starting the equipment, and commissioning it with some load to see if it's operating correctly. Then comes testing it with a full programming load, as well as checking that it will run correctly during failure scenarios.

As these guidelines indicate, managing a data center renovation requires solid, proven experience. "You want a real track record," Lehman says. Firms that fit the bill will be able to point not only to the centers they've completed, but also can discuss current trends and thinking, and offer potential clients a range of options. It's critical that the individuals in charge have extensive experience and clearly understand how all elements affect each other: the computer hardware, the computer software, the telecommunications network and the facility infrastructure, Evanko says. "All have become very technologically interwoven."

This isn't the time to shop for bargains, McFarlane says. "The cost of doing it right is cheap versus the cost of what's in the facility."

After all, the data center is key to many organizations' profitability and success. The way in which it is designed, engineered and built — and renovated — affect its ability to handle the job for which it's intended. 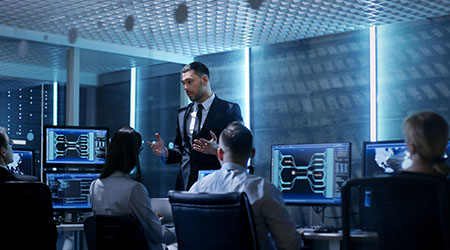