The goal should not be no background noise. Rather, static ambient noise can actually improve speech privacy.
By Loren Snyder   Commercial Office Facilities
OTHER PARTS OF THIS ARTICLEPt. 1: How To Balance Speech Intelligibility with PrivacyPt. 2: How To Match Facility Acoustics to a Space's PurposePt. 3: This Page

Experts note that the role background sound plays in intelligibility isn’t well known outside of acoustical circles and therefore it’s often overlooked when designing a space. “Many believe they have to make their environment as silent as possible in order to achieve effective acoustics,” says Moeller. That approach “usually has the opposite result.”

Having static ambient noise — via something like sound masking equipment — can help improve speech privacy. If such a system is required, says Moeller, the sound produced must be tuned to meet a specific masking spectrum or “curve.”

Considering the reflection off environmental surfaces is also important, says Madaras. “The reflections [of spoken sound] need to arrive within 30 to 50 milliseconds or sooner after the direct sound that travels directly from the speaker’s mouth to the listener’s ears.”

To arrive that early, he notes, those contributing surfaces must be close to either the speaker or the listener.

The sound that reflects off them combines with the direct speech and makes it louder (increases the signal to noise ratio) and thus more intelligible, Madaras says. “However, once those reflections arrive at the listener’s ears later than 80 to 100 milliseconds after the direct speech, they become part of the noise and make speech less intelligible.”

There are certain situations where speech intelligibility is a non-negotiable concern for all building occupants. At the top of any list: Emergencies when occupants are trying to hear messages from mass notification/emergency communications systems.

“Although the decibel level of sound masking is not loud enough to interfere with mass notification broadcasts, all sound masking systems have the ability to be shut off in the event of an emergency,” Hughes says. He further notes that sound management systems generally integrate with all major mass notification or emergency communications systems.

Moeller says that paging announcements, emergency announcements, or any other mass notification system communications should be set according to background noise levels, including sound-masking noise. This can be hard to predict, particularly during a situation that requires emergency egress. 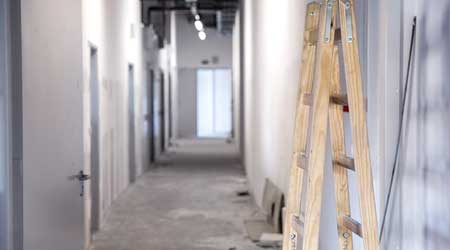