Commercial Office Facilities
OTHER PARTS OF THIS ARTICLEPt. 1: This PagePt. 2: Work on California State Office Buildings 8 and 9 Goes Beyond Green

When the State of California began implementing its “Go Green” initiative, one of the first building construction projects to jump wholly into this uncharted territory was the remodeling of neighboring State Office Building 8 (OB8) and Office Building 9 (OB9).

Completed in 1967, these twin towers located in the heart of downtown Sacramento’s government office district were then the tallest and largest office buildings in the city, filling an entire city block. “This project was perfectly poised, then ultimately successful in breathing new life back into the two 20-story towers, transforming uninspiring structures into modern models of efficiency while providing the platform to demonstrate the State’s emphasis on sustainable design efforts,” says Greg Bucher, AIA, LEED BD+C is a project manager with HGA Architects and Engineers, which designed the project.

The identical twin towers stand 20 stories high (plus a basement). Occupying a full city block at 744 P Street, the 310,000-square-foot structures are intended to house 1,700 employees.

The $157 million project is part of the State’s Excellence in Public Building Program, which includes an emphasis on sustainable architectural design. After years of planning, construction for the project took another four years, and ultimately led to the achievement of LEED Gold Certification by the United States Green Building Council (USGBC) — a significant step beyond the State-targeted Silver rating.

Today the buildings are again an integral piece of the city’s skyline, almost completely full in housing a state department previously spread throughout multiple facilities in Sacramento.

The renovation was sequenced to first complete the new lobby, one of the two towers, vacant OB 8, and the primary circulation areas of the plaza. Old electrical, plumbing and air conditioning systems were removed and replaced. Energy-efficient mechanical and electrical systems were installed, including occupancy sensors and water-saving plumbing fixtures. An airside economizer maximizes use of outside air ventilation. Original air handling units from the 1960s were refurbished to enable them to be energy efficient and cost efficient as well. The only new air handler is in the new lobby.

Building materials like carpet, paint, wood doors and cabinets high in recycled content and renewable resources, and low in or altogether free of VOC and other harmful products, were also used in the upgrades for both cost effectiveness and sustainability. Asbestos-laden fireproofing, ceiling tile, flooring and other materials were removed. A new stair has been built from top to bottom to complement the two original back-to-back conveyances of each building, and high-tech fire alarm and smoke control systems added that meet today’s more strict building code requirements.

In its first year of operation, Office Building 8 impressively demonstrated the impact of green design. While reusing almost 100 percent of the existing building structure and exterior skin, reports indicate approximately 20 percent less energy use and 40 percent less water use. 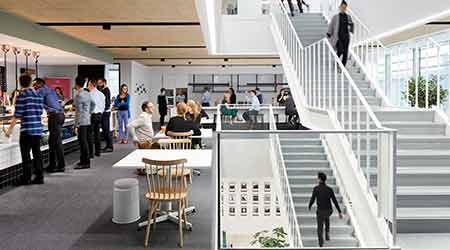