Most people take ceiling systems for granted, but the truth is, the type of ceiling system in an office space has an enormous impact not only on employee productivity but also on overall job satisfaction.

Ceiling systems offer much more than a simple cover for the plenum. But before a system is selected, the facility executive needs to know what the space will be used for, says Rob Rebman, president, Acoustic Ceiling Products. Is it a conference room? An executive office? A collaborative space? A classroom? Armed with this knowledge, facility executives can better sift through the various ceiling products and select a system most suitable for the space.

With office spaces favoring more open teaming spaces and with more employees than ever before occupying these spaces, companies have found new ways to encourage collaboration among employees. Unfortunately, with this trend come issues of speech privacy, both for the speaker and for those around him or her. “Major studies show that employees rate speech distraction the number one facilities issue that impacts their job satisfaction and productivity,” says Fred Folsom, director, office segment knowledge and client education, Dynasound. Noise problems also arise from office equipment, such as copiers, and from facility systems, such as HVAC.

Privacy issues can often arise in areas with poor acoustic design, including areas that are not traditionally considered “open.” “Corporate information discussed behind closed doors in private offices is not always secure,” says Folsom. “Security of corporate information and confidentiality can be compromised.” Even medical facilities run the risk of compromising doctor-patient confidentiality.

Acoustics is also critical in schools, but here students need a high level of intelligibility. Interference can come in the form of reverberation, HVAC noise and noise from outside the classroom.

When it comes to gauging acoustical performance, both of products and of spaces, an array of field and lab tests, each with its own figure of merit, is available. A critical measure for the open plan office is articulation class (AC), which is used to measure how effectively ceilings, wall panels and furniture provide speech privacy from one workspace to another.

With respect to ceiling tiles’ acoustical performance, two important indicators are noise reduction coefficient (NRC) and ceiling attenuation class (CAC). NRC measures the ceiling tile’s ability to absorb sound, which is important in open-plan offices or in classrooms. CAC measures sound reflected from the ceiling to adjacent workspaces when the dividing wall connects only to the ceiling line rather than the actual structure; CAC is critical in areas where speech privacy is important, such as private offices or conference rooms.

“Sound is a big contributor as a problem or a solution,” says Joann Davis Brayman, vice president, commercial marketing, acoustic building products, Armstrong. Higher performance ceiling products that absorb sound as well as sound masking systems that raise the background sound level so that conversations cannot be overheard can be part of the solution.

Look for minimum NRC ratings of .55, with ideal ratings for sound absorption by reducing sound reverberation of .80 to .90. For blocking sound transmission, CAC ratings of at least 35 to 39 should be selected. AC ratings, which are important in preventing speech from being overheard in open-plan offices, should fall between 180 and 200 for normal privacy.

Most experts cite easy access to the plenum area as an important characteristic to a ceiling. “You are not just looking at the ceiling itself but looking at the ceiling as a whole system,” says Rosa Lee, marketing manager, architect and owner segment, USG. The facility executive needs to consider how the entire ceiling interacts with the heating and cooling, sprinkler and lighting systems, as well as the wiring for telecommunications, including computers and phones, says Tom Ayres, vice president, sales and marketing, Hunter Douglas.

The installation and maintenance of these systems mean that the plenum is a frequently visited area of the facility. “Nowadays in schools, hospitals and offices, everyone is up here more than before,” says Brayman, noting that easy access to the plenum drives the amount of time — and thus money — it takes to do maintenance work. Tiles that drop down from the ceiling and tiles that are easily removed are available. Ceiling panels featuring more impact-resistant surfaces and integrally colored tiles, which are colored throughout the tile, help disguise any marks that may occur during installation and maintenance.

The appearance of the ceiling reflects on the rest of the facility. “A bad ceiling system makes the whole space unappealing,” says John Mandel, manager, corporate communications, USG. Different parts of the facility, such as a conference room and a teaming space, may call for different ceilings. Qualities such as color, scoring and texture might set spaces apart, as will the use of metal ceilings and curved ceilings.

Light reflectance is another quality many more facility executives are seeking in their ceilings. “With a high level of reflectance on the ceiling plane, you can reduce the number of light fixtures and save money on lighting and maintenance,” says Brayman.

Tiles that can be recycled and tiles that are made of recycled material are gaining popularity as more and more facilities are trying to receive a U.S. Green Building Council LEED rating. Furthermore, many facility executives realize the health risks of volatile organic compounds to their employees and are beginning to examine low- or no-VOC options.

And as issues of mold and mildew become widespread, companies are producing ceiling tiles designed to resist such problems.

Ceiling system innovation can’t be limited to environmental matters. For example, ceiling tiles that combine sound masking, paging and music are currently on the market. Ceiling tiles with antennae for wireless communication built into them are also gaining recognition.

As facility executives become aware of the range of products offered, manufacturers are responding by offering more choices. “Even though you may have a small budget, this doesn’t mean you need to have a bad design,” says Lee. “There are always options.” 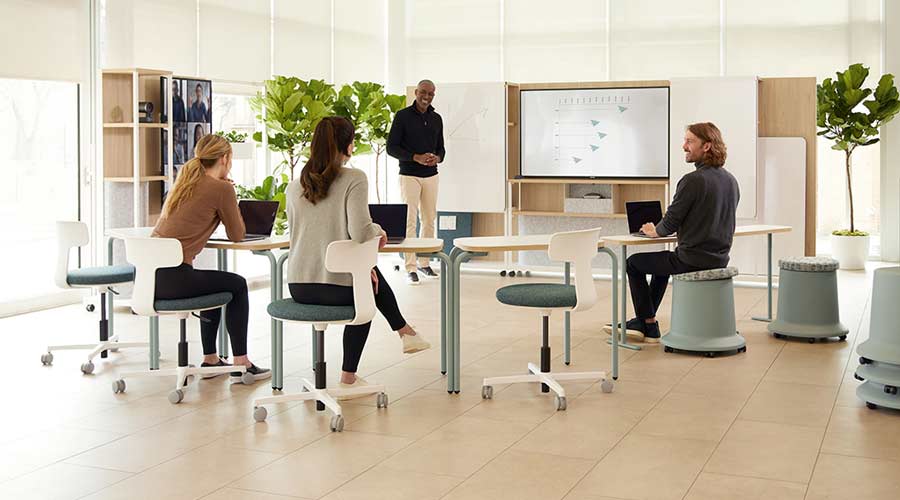