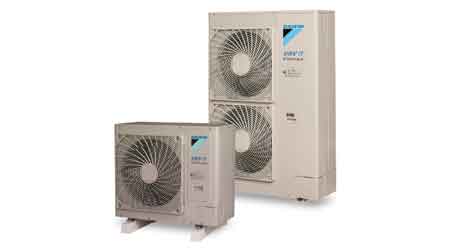 VRV IV-S-series incorporates Daikin’s patented variable refrigerant temperature (VRT) technology to maximize year round comfort and energy savings. Conventional HVAC systems are designed around a sweet spot where they operate at their best efficiencies at a certain temperature. When temperatures are mild, conventional HVAC systems will continue to operate at full capacity and therefore continue to expense as much energy during these part-load conditions as they do during full-load, extreme hot and cold temperature conditions.

The built-in VRT technology provides optimal year-round efficiencies. The VRT technology will automatically adjust the optimal operation of the VRV IV-S-series to ramp up or ramp down so that it uses only the energy necessary to provide optimal performance and efficiency in part-load and full-load conditions. Heating operating ranges have been extended down to -4 degrees and cooling operating ranges have been extended up to 122 degrees.

The new VRV IV-S-series has improved cooling and heating efficiencies and has expanded the capacity range with a new, larger 5-ton model offering as compared the previous VRV-IIIS models. Previous 3 and 4-ton model sizes were in the taller 53-inch cabinets. The newer 3 and 4-ton VRV IV-S-series models are now in a much smaller 39-inch cabinet height, ideal for the growing mini-VRV markets where the smaller footprints are important. The newer 3- and 4-ton models are not only 26 percent smaller but are also 39 percent lighter on the 3-ton and 34 percent lighter on the 4-ton models as compared to the earlier VRV III-S models.

The new VRV IV-S-series is a customizable system capable of connecting up to 10 indoor units with a wide range of 11 different types of indoor ductless and ducted models to choose from that include cassettes, concealed ducted, ceiling suspended, wall mounted and floor standing models as well as the ability to work with the Daikin Zoning Kit (DZK).

The VRV IV-S-series is built with a highly reliable Daikin inverter swing compressor that delivers higher compressor efficiencies than a standard rotary compressor. Daikin’s swing compressor technology integrates all moving parts into one component to prevent abrasion and refrigerant leakage because there are no gaps between high- to low-pressure zones.