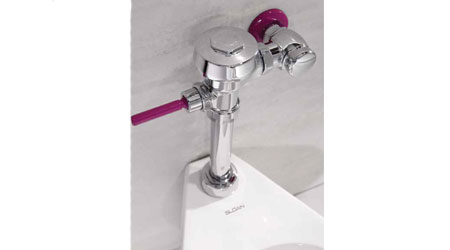 The Sloan® Royal flushometer line for urinals and water closets has expanded with the development of new Sloan Royal reclaimed water flushometer models engineered specifically for use with reclaimed water infrastructure in new construction or major retrofits. These types of systems help municipalities that use reclaimed water as an alternative water source to help preserve potable water.

The Sloan Royal reclaimed water flushometer, available in manual and sensor configurations, is the first solution specifically designed to withstand the harsh conditions of reclaimed water. "Reclaimed water systems are more aggressive than potable water systems due to the chemical content and nature of the water. These environments can be more conducive to dezincification, which can diminish mechanical strength," says Mike Gipson, Flushometer Product Line Manager for Sloan. "Sloan uses a high copper, semi-red brass in our flushometers giving them the ability to withstand these harsh chemical conditions, as opposed to a yellow brass that is higher in zinc, used by most other flushometer manufacturers."

In fact, all critical components of Sloan Royal reclaimed water flushometers, including the cover, valve body, control stop and the copper sweat solder kit, are made of semi-red brass. In addition, to better withstand the harsh conditions of reclaimed water, all organic rubber components have been replaced with synthetic compounds.

Sloan has also utilized the industry-standard purple color, which is used to identify water district/municipal water lines and other systems using reclaimed water, as mandated by both the Uniform Plumbing Code and the International Plumbing Code. Several key components including the wall flange, inner cover and diaphragm guide are colored purple to signify the use of reclaimed water. The flushometer also includes a wall plate communicating the use of reclaimed water and is available with an optional purple handle.

For more insights on the products, technology, benefits and challenges of the Building Internet of Things, visit www.FacilitiesNet.com/IoT