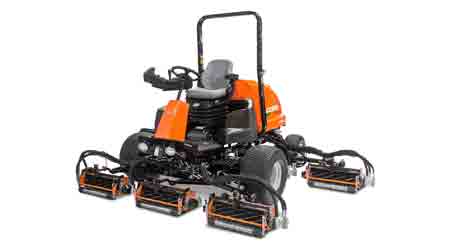 The all-new LF557/LF577 is the industry’s only Tier 4 Final, seven-reel fairway mower, offering unrivalled productivity. The LF557 is equipped with five-inch reels and the LF577 is equipped with seven-inch reels, with both mowers boasting a massive cutting width of 139 inches, allowing the ability to mow up to 11 acres per hour.

“Since the 1980s, our LF line of fairway mowers has been the gold standard for golf courses that want smooth, pristine-looking fairways that offer superior playability,” says Lee Frie, product manager for Jacobsen. “The new LF557/LF577 takes that legendary history and adds more than three feet of cutting width, allowing superintendents to significantly increase productivity without sacrificing quality-of-cut.”

In addition, the new mower series features maintenance reminders that are displayed automatically on-screen and scheduled intervals to aid in proper service and increased up-time.

“Anytime superintendents can get the biggest jobs on the golf course done faster, it means there’s more time for crew members to work on other things,” says David Withers, President of Jacobsen. “Until now, the trade-off has been productivity over quality-of-cut, but the new LF557/577 offers the best of both worlds: giving superintendents the opportunity to present beautiful fairways and save valuable time.”