The New Orleans East Hospital restored a full service hospital to the area in September 2014, after Hurricane Katrina left the residents without a hospital since 2005.

The former Pendleton Memorial Methodist Hospital was devastated in the flooding brought on by Hurricane Katrina, leaving the residents of New Orleans East without a hospital since 2005. After years of planning, officials broke ground on the New Orleans East Hospital in January of 2013. The $130 million project, which includes extensive renovation of the East Tower and construction of a new, 71,700-square-foot Patient Care Pavilion, restored a full service hospital to the area when it was completed in September 2014.

To ensure that the new building was hurricane-proof, the East Tower of the hospital was strengthened to withstand winds over 130 mph, while primary electrical equipment and a new backup generator were elevated above base flood elevation lines. Designers retrofitted the structural framing system and improved the roof to withstand the uplift forces associated with hurricane winds.

Wall Panels Give a Dated Building a New Lease on Life

When FoxRock Properties purchased Longwater Place, while the existing building was dated, it was structurally sound. It just needed an exterior facelift to transition away from the precast corduroy concrete tilt-up panels that made it a dark, heavy, fortress-like structure.

Tenants and visitors to 4 World Trade Center will find a first-class mobility experience within the building, including 37 custom Schindler 7000 elevators (34 passenger cars with the company’s destination-dispatch system, and three high-rise service cars). 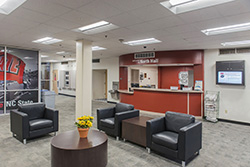