Windows are a building's eyes on the world. They create a connection with what is beyond the boundary of the workplace, enlarging the sense of space and creating an interplay between what is indoors and out. And even where there is no desirable view, at the bare minimum windows let natural daylight into the space, with its host of aesthetic, psychological, and physiological benefits.

The physical characteristics of windows have in the past been a limiting factor in how they could be deployed in the building's envelope. Even efficient glazing assemblies have traditionally not matched a brick wall in thermal performance, for example. Expansive vistas, though desirable, required multiple units, leading to pesky lines in the field of vision and weaker thermal performance at the joints.

Facility managers considering extensive building envelope renovations or new construction projects should be aware that the window and glazing industry has been hard at work evolving their technologies to provide the market with bigger and smarter window assemblies that have more robust thermal performance than ever before. Here are six window technology innovations to keep in mind.

1. Bigger is better. The size of individual panes of glass has been increasing over the years. A larger pane allows for a larger unobstructed view. One manufacturer's representative called it the "Apple effect." As the public has grown to associate Apple's sleek aesthetic and retail outlets skinned almost exclusively in glass as desirable and modern, others have followed suit. That may be overstating Apple's influence a shade, but there's no denying that the market has an appetite for bigger and bigger windows, with several manufacturers touting their ability to fabricate their largest panes of glass yet. At least two manufacturers now have a maximum pane size in the neighborhood of 130 inches by 240 inches. "The demand is pushing the limit for what people want glass to do," says Ryan Hoffman, manager of client development with Viracon. The most common use for lites of glass this size would be in lobbies and other statement spaces around the ground floor with lower wind loads, he says, though it is still uncommon to see projects that fully max out the size possibilities.

The size by itself is impressive, but equally notable is that demand for panes of this size has grown to the point that manufacturers are now making jumbo glass available domestically on a non-custom basis. Previously such glass would have been a specialty product imported from overseas (where panes as long as 30 feet are possible), adding cost and complexity to projects. There is no practical upper limit to the size of individual panes of glass from a manufacturing standpoint (as long as the necessary equipment is available, of course) but the larger a window unit becomes the more cumbersome and specialized it becomes to install.

A larger pane of glass could also help improve thermal performance at the envelope. "A lot of time the weak point in a glazed curtain wall is where the frames are, along the edge of the glass, whereas the center of glass achieves a better U value," says Hoffman. "By using a larger lite of glass, you have less frame, so less weak points."

2. Bird-friendly glass. Up to a billion birds die each year after colliding with glass in the U.S., according to the American Bird Conservancy. That figure includes residences, but as commercial architecture tends to more and more shiny glass exteriors, its contribution to the problem certainly is not decreasing. The challenge is that birds do not perceive clear glass as a solid and think they can fly through an opening that does not exist. With reflective glass, birds see clear sky or sheltering trees and fly toward them, only to collide with the glass. 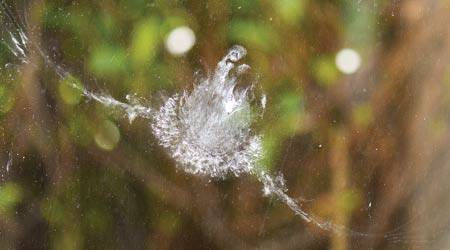 (Up to a billion birds die after colliding with glass in the U.S. each year. Window technologies such as UV patterns visible only to birds aim at reducing that number.)

Strategies to reduce bird impact in the past have included adding a frit pattern to the window or adding tapes or other decals and laminates. This helps the birds but can affect the view. At specific times of the day, even glass with a visible frit pattern may lose that protection if the glass is very reflective. Manufacturers have been working on patterns in the UV spectrum, which would be visible to birds, but largely invisible to humans. One challenge is creating enough of a contrast at low sunlight levels, according to the Bird-Friendly Building Design, a guide from the American Bird Conservancy.