With the new Chemical and Materials Sciences Building, the Department of Energy’s Oak Ridge National Laboratory saw first hand the power of working with a Building Information Model (BIM).

The steel structure was already in place on the project when BIM helped to uncover a significant problem: Chilled water piping in the building would not fit where it was drawn in the design model. That problem might have set the $95 million project behind two months or more had it been uncovered later, when the mechanical systems were being installed. But because it was found early — before the exterior enclosure had even begun — the problem was quickly solved. “We were able to work hand in hand with the design and the owner to reroute that piping with very, very few modifications structurally,” says Daniel Joseph, project manager for McCarthy Building Companies, which provided preconstruction and construction services. He estimates that the cost of the fix was less than $2,000, with no impact on schedule.

BIM enables the building team to visualize a building during the design and construction phase. The Building Smart Alliance defines it as “a digital representation of physical and functional characteristics of a facility. As such it serves as a shared knowledge resource for information about a facility forming a reliable basis for decisions during its lifecycle from inception onward.”

BIM is more than a software tool. It marks a new, more collaborative approach to design and construction. For the Oak Ridge facility staff, BIM offered the opportunity to see what the building would look like while it was still in design. BIM enabled them to make better choices about which labs should be located where — putting a lab with a heavy need for chilled water, for example, near the process chilled water main skid.

BIM also enabled Oak Ridge to ensure that the completed facility would be maintainable — for example, that there was enough clearance around a fan coil unit to allow filters to be changed. 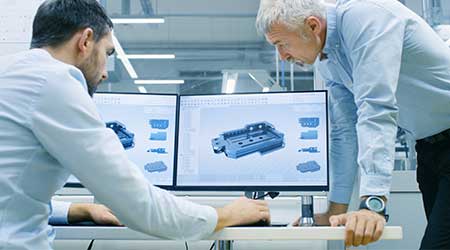 How To Shop for Facility Software in Four Steps