White Plains, N.Y. — May 11, 2016 — The New York Power Authority and State University of New York are partnering on several energy efficiency projects that will save millions of dollars and cut greenhouse gas emissions by about 5 percent at four campuses.

The projects are expected to reduce greenhouse gas emissions by more than 11,000 tons annually, the equivalent of taking more than 3,200 cars off the road. The upgrades are being carried out under Gov. Cuomo’s BuildSmart NY program, a comprehensive initiative that calls for a 20 percent increase in energy efficiency in state-owned and state-managed buildings by 2020.

“SUNY is a valued partner of the Power Authority and together we have made great strides in lowering the energy use on campuses across New York,” said Gil C. Quiniones, NYPA president and CEO. “Under BuildSmart, there are numerous energy efficiency projects in the pipeline that will save New Yorkers millions of dollars.”

• Stony Brook University: NYPA recently completed a project that will save more than $1.3 million and remove nearly 5,500 tons of greenhouse gases annually, the equivalent of taking more than 1,100 cars off the road. NYPA provided $11.4 million in financing for more than 52,000 new light fixtures and more than 4,800 lighting sensors, improvements to air-handling systems, and building management upgrades.

Stony Brook also anticipates completing further energy-saving improvements by the end of this year. With about $11.5 million in NYPA financing, they include interior lighting upgrades and controls for air handling. They are expected to save an additional $800,000 annually.

• SUNY Upstate Medical University: NYPA and Upstate Medical University in Syracuse have worked on several projects in recent years, culminating in more than $10 million in improvements that will save $570,000 annually and cut harmful greenhouse gas emissions by 2,800 tons. The work includes the installation of air-handling equipment, lab hood exhaust system upgrades, boilers, premium efficiency motors, and lighting sensors and controls.

• University at Albany Bioscience Development Corp.: Slated for completion by the middle of this year is a $2 million replacement of existing switchgear for the SUNY Albany Bioscience Development Corp., a private entity that leases space at the University of Albany. The reliability measures include the replacement of a 34.5 kilovolt substation and two 4,800-volt transformers.

“SUNY is committed to helping create a more energy-conscious New York and we are thrilled to do so alongside NYPA,” said SUNY Chancellor Nancy L. Zimpher. “This long-term partnership has enabled our campuses to make real advances in saving energy and lowering costs in creative ways. We look forward to growing this innovative collaboration into the future."

NYPA is also developing more than a dozen energy master plans at SUNY campuses that will act as in-depth blueprint for how to save energy throughout the university system.

Over the years, NYPA and SUNY have partnered to complete 107 energy efficiency and clean energy projects, saving 163,000 megawatt hours of electricity and 133,000 gallons of fuel a year, while reducing greenhouse gas emissions by about 110,000 tons annually. (One megawatt hour is equivalent to the amount of electricity used by about 330 homes during an hour.)

NYPA is the nation's largest state public power organization, through the operation of its 16 generating facilities and more than 1,400 circuit-miles of transmission lines. NYPA uses no tax money or state credit. It finances its operations through the sale of bonds and revenues earned in large part through sales of electricity. More than 70 percent of the electricity NYPA produces is clean renewable hydropower. For more information visit www.nypa.gov. 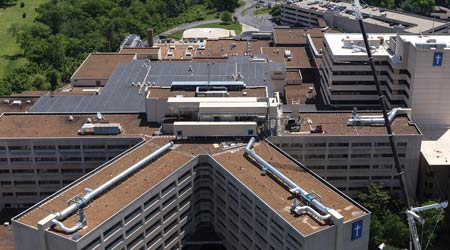