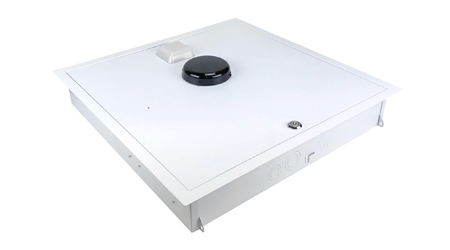 “ezRoom is now even easier—for teachers, technologists, and installers—and more complete than any other school AV system out there,” says John Merline, FrontRow’s Vice President of Marketing. “This month, we’re introducing over ten improvements that make ezRoom an even more obvious complement to any learning space.”

For teachers and instructional technologists, these improvements are about ease of content sharing and freedom of movement. The new model CMBT Bluetooth receiver works with any FrontRow amplifier and mounts easily in above-ceiling or wall-mount enclosures. A new model CB55 wall control complements the receiver with a Bluetooth pairing button, a volume control, and handy audio input/output jacks (pairing can also be handled directly on the receiver itself or via FrontRow’s touch-screen control panel). “We know from research that at least half of classroom learning requires listening,” says Merline. “This ezRoom update makes it easier to give students a front-row-seat to instruction media that’s as clear as their teacher’s voice using FrontRow’s smart microphones.”

“FrontRow is unique in pre-assembling components in our enclosure,” says Merline. “With these new installation advances, we’ve just shaved as much as 40% off the time crews need to hang items in the ceiling — there’s just one thing to hang instead of three.” FrontRow is simplifying and speeding installation in several ways. For drop-ceiling installations, the updated plenum-rated enclosure features a handy new slam-lock, key storage, and cable clips to keep things tidy. Sensors and room mics can now be mounted directly on the RF-friendly lid, and the company can pre-install a mounting bracket for customer-supplied Apple TV receivers (Chromecast and Microsoft Wireless Display Adapter units, being smaller, can be mounted directly on FrontRow’s enclosure base). In addition, FrontRow is unveiling two new paintable wall enclosures that accommodate all of the new wireless features and full range of the company’s amplifier, receiver, and switch combinations (these can also be used as mounting options for hard-lid ceilings).

Present in thousands of schools in the US, Canada, Australia, and other countries, FrontRow’s classroom audio technology including ezRoom is known for improving student comprehension equally throughout a learning space — leading to increased engagement and academic performance — as well as helping safeguard teachers’ voices, increasing their energy, and effectively curtailing the number of sick days they take due to voice disorders.

A standard ezRoom package includes an intelligent wireless microphone for the teacher, a customized enclosure that neatly houses a variety of audio-visual components, and speakers that clearly distribute teacher and student voices and media audio evenly to each student across a learning space. Student microphones, automated lesson-capture, device control, and numerous emergency-preparedness and school-wide communication features can be added.