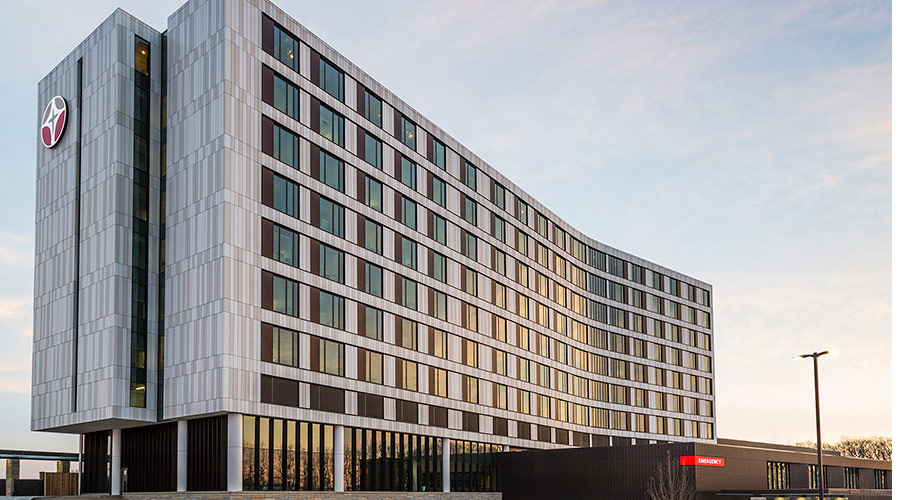 When a building boasts a LEED designation for how it was constructed and how it is expected to perform, that certification carries substantial weight and sends a message to everyone who enters.

Leadership in Energy and Environmental Design (LEED) is the most widely used green building rating system across the globe. In effect, buildings that are LEED-certified set the standard for sustainability and efficiency.

Architects who embark on a building project that seeks LEED certification are ultimately working to solve a complex equation. They must carefully weigh every choice they make. That includes the products that are eventually specified for the building envelope, which has a substantial impact on the structure's energy consumption and performance.

Products manufactured by CENTRIA® helped to solve that equation in two recent high-profile projects – the signature building for a science program at a major Texas university, and a new healthcare facility on a hospital campus in Michigan. 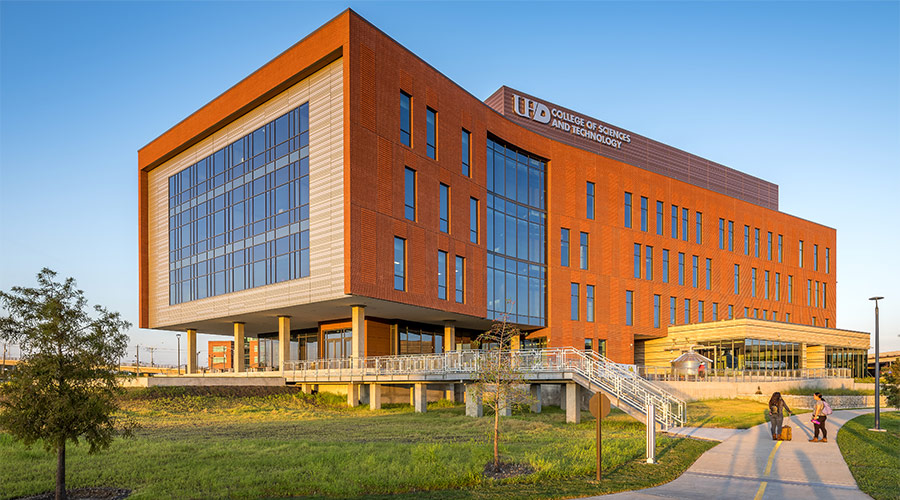 Getting it Down to a Science

The University of Houston Downtown (UHD) undertook a bold initiative when it decided to build the new UHD Sciences and Technology Building, which would become the central hub for the College of Sciences & Technology at the school.

A noteworthy addition to the Houston skyline, the structure also became the first LEED-Gold certified building in the University of Houston System.

The Science of Aesthetics

During the design phase, architects and designers knew they had a tall order to fill.

"[UHD] wanted [the building] to be a billboard of science and technology for anyone that was going through there," said Michelle Old, project designer at Kirksey Architecture, which designed the building.

The site for the structure helped to set the stage – a bayou on one side, the city on another, an interstate nearby and a public transportation hub just down the street.

"They really wanted for it to stand out and for people to take notice, whether you are walking on the trail by the bayou, or on the light rail, or in a car on the freeway," Old added.

The design team specified CENTRIA Concept Series panels for the northwest and southeast elevations of the building, earmarking them to create a frame for a wall of windows at either end of the structure. One side is the home of the research labs, and the other houses administrative offices. 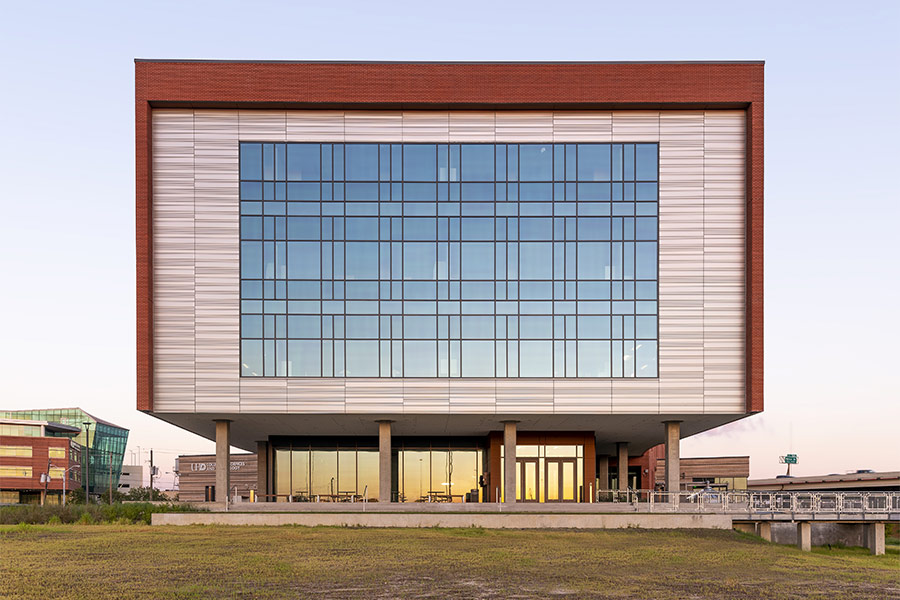 The Concept Series panels were the perfect choice given their versatility and their durability.

"With these different profiles that are all interlocking, we could create this cool panel that was reminiscent of science," Old noted. "It did attract a lot of attention because it has this rhythm and this shadow play, but it also goes back to that resiliency. It's durable. It can take that wear and tear of being next to a freeway."

A solution that contributed to the building's LEED-Gold certification, CENTRIA's Concept Series Single-Skin wall panels feature concealed fasteners and a common-lock joint that allows the panels to be integrated with each other. They can be installed in a variety of rainscreen applications to form a complete wall system.

Concept Series panels come with stand-off clips that provide a ventilation cavity and drain plane behind the panel. The panel clips allow for thermal and seismic movements.

Because it houses scientific laboratories, the UHD Sciences and Technology Building included a sizable infrastructure for mechanical equipment and air handlers, all housed on the "penthouse" part of the roof.

Once again, designers selected Concept Series panels to form a ventilated barrier around the equipment, which helped to change the dynamic of the roof.

"We were able to conceal [the equipment] with the CENTRIA panel, and because the CENTRIA panel is aesthetically pleasing and has all this rhythm, it ends up being a plus rather than an eyesore," Old reflected.

Once the building was completed, the university ultimately used the "penthouse" as the backdrop for an actual billboard that carries the name of the school.

A two-year construction project, the UHD Sciences and Technology Building opened for instruction in the fall of 2019. 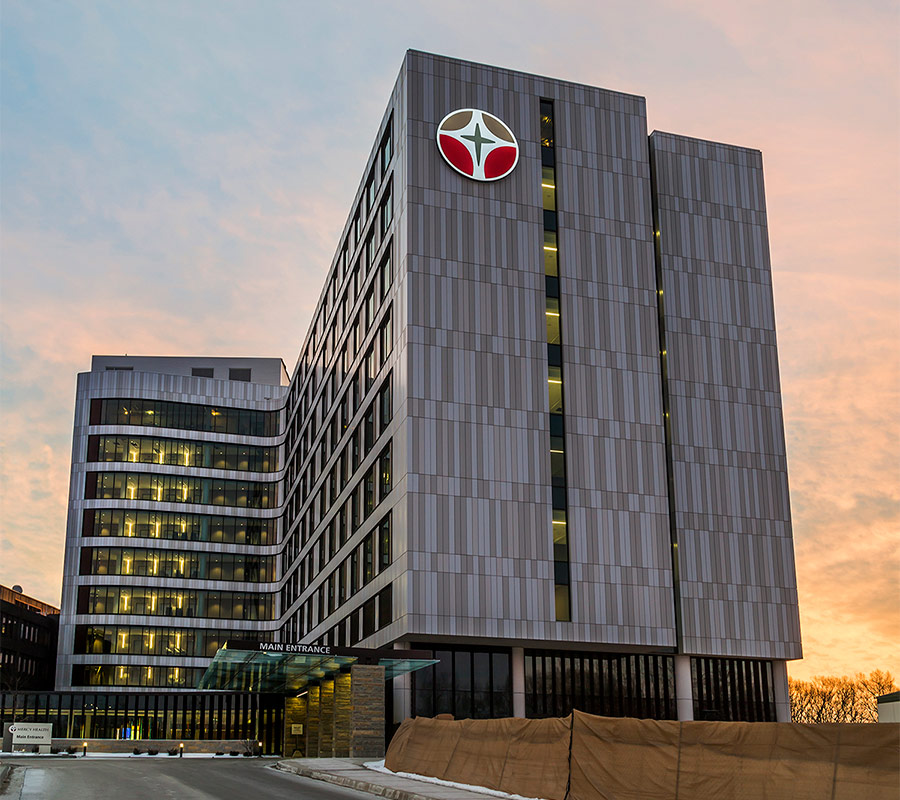 In Muskegon, Michigan, designers sought to fill a prescription for sustainability with the development of the Mercy Health Muskegon Medical Center, a $271-million, ten-story health care facility and the crown jewel of the Mercy Campus in Muskegon.

The new building effectively doubles the amount of floor space for medical staff to treat patients.

Well before the groundbreaking for the impressive facility took place in 2016, planners knew they had a number of mandates to meet as they began designing the building.

Among other key considerations, owners wanted Mercy Health Muskegon to serve as a signature structure for the medical campus. They also sought to potentially achieve LEED certification.

The Need for Speed

Accelerating the timeline for completion became a key consideration, one that impacted decisions about the type of insulation specified for the building.

Designers chose MetalWrap from CENTRIA, the company's insulated composite backup panels that serve as the ultimate backup wall for nearly any type of exterior rainscreen system.

"Speed to market has become a critical issue," said Mike Andric, associate vice president and healthcare architect at HGA Architects, who noted that the MetalWrap solution was easy to install by a singular crew, saving time.

"You look at one trade coming in versus two or three trades coming in to enclose the building, and obviously there's going to be a difference as far as coordination efforts go," Andric added. "Less coordination means more efficiency."

Crews installed nearly 100,000 square feet of MetalWrap on the exterior wall of the high-rise facility.

Rather than designing what amounted to a "white box" for the new healthcare facility, designers wanted to create visual interest with the building's exterior while also delivering versatility and optimal performance.

The solution: Intercept from CENTRIA, which was installed over the MetalWrap and became the face of the building, covering almost all of the outer walls.

The design team used a customized program to create a random pattern of colors for the exterior wall, which contributed dramatically to the building's curb appeal. 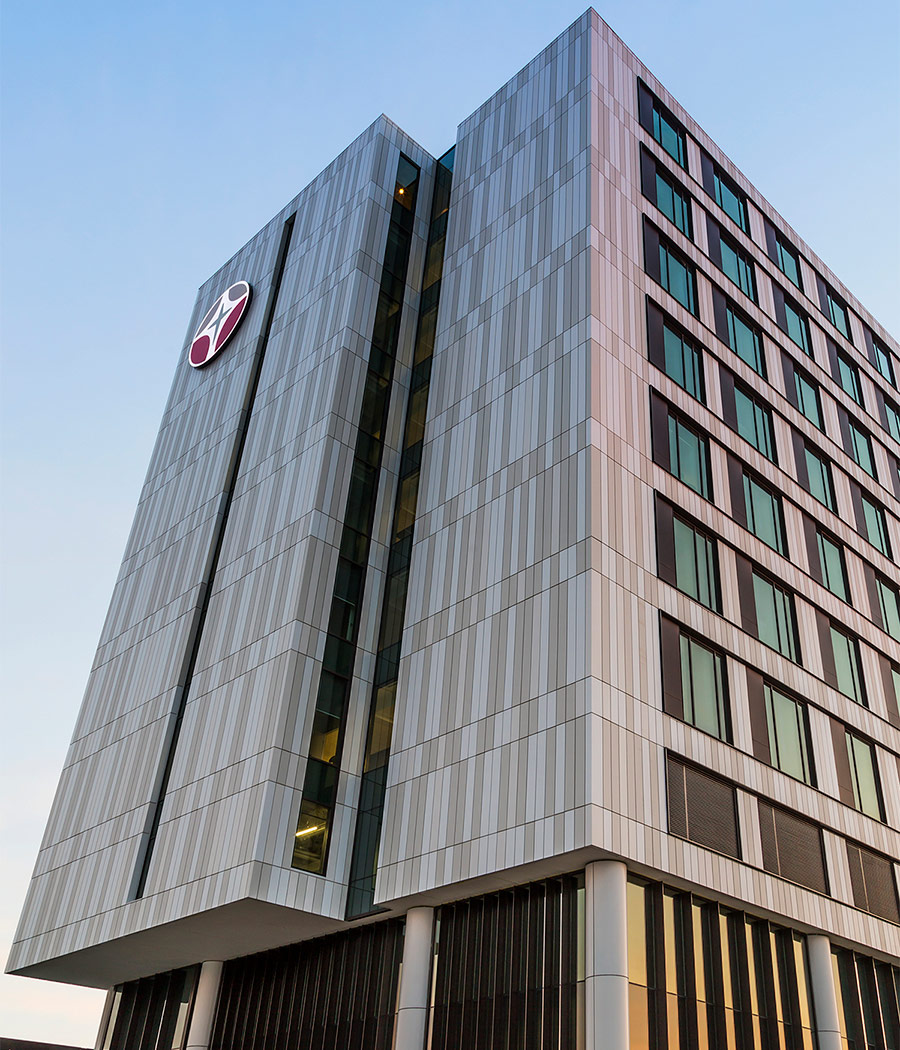 "We ended up going with three different colors [for Intercept]," Andric noted. "They looked the same when you're looking at small samples, but in the field, you can really detect the difference between the colors of the panels."

Intercept is a modular metal wall panel system that enables designers to create architecturally pleasing exterior facades along with the protection afforded by a rainscreen. The solid metal substrate is non-combustible and is compliant with NFPA 285.

Intercept also carries the Declare Label, developed by the International Living Future Institute. The third-party certification demonstrates how the product can contribute to the creation of a building that boasts sustainability credentials.

The product achieved the label in 2020.

Intercept is 98.6% recyclable. It also has a 20-year finish warranty and can withstand the life span of the building when following proper maintenance procedures.

Mercy Health Muskegon opened the new facility in phases starting in late 2018 through 2019.

Architects, planners and the medical system have submitted an application for the facility to be officially LEED-certified.