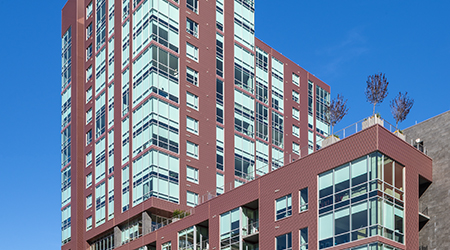 In today’s construction environment, the dual demand for optimal performance and eye-catching results has never been greater. Architects, designers and building owners demand both.

Evolving building codes require the building envelope to deliver even better thermal properties and protection from the elements.

At the same time, the building must stand out and get noticed.

Translation: Form and function must go hand in hand.

For more than a century, CENTRIA has remained on the cutting edge of this crossroads. Two recent projects in two major American cities demonstrate how CENTRIA delivers value through a constant commitment to innovation. 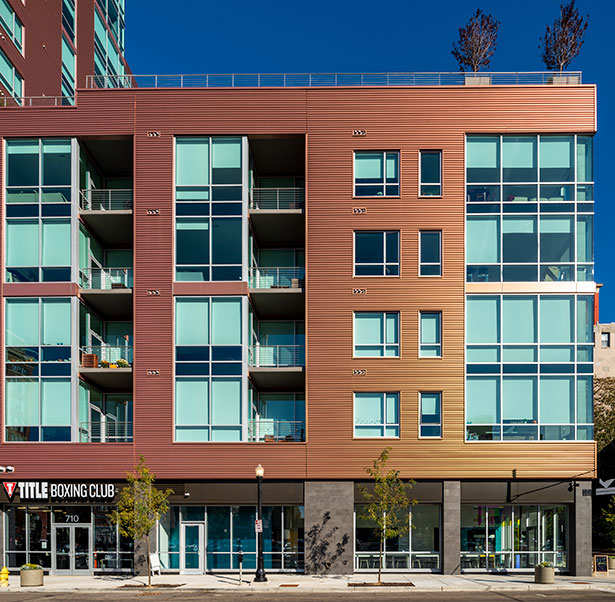 The reviews came in quickly once Encore Urban Living was completed in Cincinnati. The consensus: A residential high-rise complex that reshaped the city’s skyline.

Cincinnati Refined weighed in by calling it “…a colossal color-changing chameleon on the east side of downtown” and “…the city’s only color-changing skyscraper.”

Center City Living at its Finest

A $52-million, 17-story mixed-used development at the corner of 8th and Sycamore streets in Cincinnati, Encore Urban Living includes 133 luxury apartments and amenities such as a pool, a sundeck, an exercise room and a grand lobby. The high-rise building also boasts a 500-space parking garage, two restaurants and a fitness studio.

When designing the building, architects and planners were focused on making a statement. They wanted to erect a modern, dynamic structure that would clearly distinguish itself amongst other buildings on the street, and that meant making the optimal choice for the building’s exterior.

The solution: CENTRIA’s Concept Series CS-260 Horizontal metal panels in Dusty Rose with a Smooth finish and Kolorshift coating. Crews installed 50,000 feet of the CENTRIA panels as the external cladding.

Concept Series single-skin rainscreen panels feature concealed fasteners and a common-lock joint that allows the panels to be integrated with each other. The panels can be installed vertically or horizontally and have an unbroken appearance that further adds to the product's aesthetic versatility.

The Kolorshift Series Coating System is an iridescent architectural coating that enables the color of the exterior metal panel to change hues with varying angles of light. This means that the panels on the structure shift from one color to another as the light reaches the panels.

The result is a stunning building facade that has contributed to a city skyline’s transformation. Encore Urban Living stands out amongst its peers on the block and has opened a new chapter in Cincinnati for people eager to embrace city living. 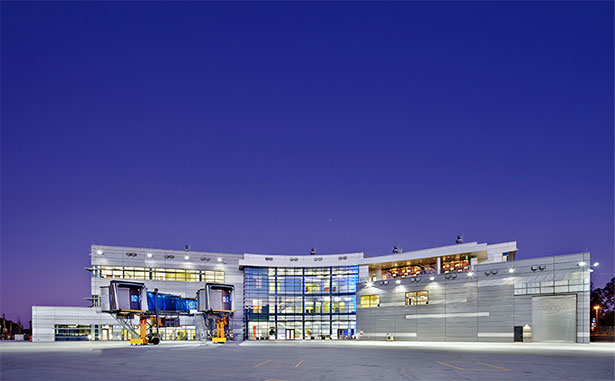 Visual impact was also critical when designers and architects began the planning for the Boeing South Carolina Delivery Center in Charleston.

The building’s purpose was to better facilitate the handover of aircrafts, which meant the building had to help transform the customer experience.

Having these milestones in place at the outset, architects decided that CENTRIA metal panels were the optimal choice for the building’s exterior. 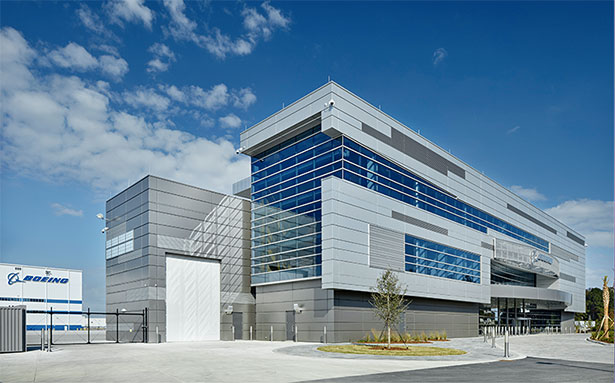 For the building’s façade, designers wanted to emulate the idea of movement and exploration to telegraph the nature of flight. The design team turned to CENTRIA and its Formawall Dimension Series insulated metal panels for their aesthetic and inherent performance qualities.

The panels feature a pressure-equalized side joint to help prevent water infiltration. Formawall also integrates with most glass wall, window and louver systems and comes in a variety of sizes.

Formawall created plenty of flexibility in terms of how the exterior was fashioned for the Boeing Delivery Center. In the final design, flat panels are married with corrugated ones to simulate motion and momentum.

The completion of the Boeing South Carolina Delivery Center made good on the “wow factor” being sought by the jet manufacturer. For Boeing’s customers, the facility has made the experience of picking up a new aircraft a special event.