Understanding new security threats is the first step towards mitigating them.

By David Lewellen
Security
OTHER PARTS OF THIS ARTICLEPt. 1: This PagePt. 2: Active Shooter Remains Biggest Security Threat for FMs

To the long list of things that facility managers would rather not worry about, a new item is rapidly being added — vehicle attacks. But the recent incidents in Europe, which may be inspiring copycats, could represent a chance for facilities to re-assess their overall security plan and make improvements, whether physical or operational.

Executing a deliberate attack with a car or truck is not difficult, says Sean Ahrens, security market group leader for Affiliated Engineers, Inc. But he also worries about accidents, such as a driver who has a heart attack or a person who presses the gas pedal instead of the brake. Viewed in that light, any person driving a car could be a threat.

Installing bollards around a perimeter is an obvious step, but they don’t have to look like barriers. Built to the proper standards, a vehicle barrier can also double as a bench, bike rack, planter, or other feature of the built environment.

The problems are quite different in city centers and in suburban, campus-like settings. “Many cities are kind of locked in,” Ahrens says. But areas that draw a lot of foot traffic may need some kind of protection, particularly when special events draw extra crowds. In those cases, Ahrens says, a popular new solution is to bring in heavy trucks to serve as a barrier for the duration of the event.

Some city ordinances require retail settings to have protections against vehicles, Ahrens says, usually thinking of preventing accidents. Traffic-calming systems also have a place in such arrangements, such as speed bumps, winding roads, and narrow lanes — and they can be easily adapted to new office park construction. The main purpose of such systems is to reduce accidents, of course, but they also make a potential terrorist’s task more difficult.

When a new facility is being built, “the earlier you plan, the easier it is to integrate security into the design,” says Zackary Tyman, security consultant and engineer for WSP. Winding roads are one such solution, and his company’s standard is 25 feet of standoff between a vehicle’s closest approach to a building (or a load-bearing column). If security is integrated into the design from the beginning, Tyman says, “you can have a bench sunk eight feet in the ground” that meets ASTM standards for stopping a speeding car.

The standards association sets specifications for a 15,000-pound vehicle moving at 30, 40, or 50 miles per hour, according to David Duda, associate partner for security planning with the engineering firm of Newcomb and Boyd. Facilities can determine which speed is the most likely to be achieved by a threatening vehicle.

Since the 1995 bombing of the Alfred P. Murrah Federal Building in Oklahoma City, Duda says, many new federal facilities have been required either to create a 100-foot vehicle standoff area or, where that is not possible, as is often the case with existing facilities, to train security personnel to monitor passing vehicles.

Duda says that a risk assessment is essential in determining which threat mitigation measures should be taken.

Monitoring can be greatly enhanced by video, particularly with the new analytic tools that are coming to market. Duda says they are already useful for swiftly identifying illegally parked or stopped vehicles, or for detecting objects left behind. If someone puts down a bag in a public space and walks away from it, some security systems can be programmed to send an alert.

As facial recognition improves, he says, a similar system could also be used to spot loiterers – although in the ongoing cat-and-mouse game, an attacker might be able to beat that system with a hoodie pulled over his forehead. But, Duda adds, such a system could also help with more benevolent tasks such as finding a lost child.

Even if facial recognition is not perfect, new systems allow security footage to be successfully searched for items such as a person running, or a group of five people in suits. Although the technology is not there yet, in the long run, Tyman says, “face recognition will replace your key card,” making stolen cards less of a concern.

It’s always easier to build a good system into a new building, although Tyman says that many older or historic buildings have had successful upgrades — the difficulty can be finding space for conduits and cables.

New developments in drones offer the opportunity to enhance security, too. At trade conferences, Tyman says he has seen a lot of recent exhibits and conversations about drones — both systems to counteract them and ways to them for surveillance. Flying in a regular pattern around a site, looking for leaks, fence breaks, or heat sources, a drone could significantly enhance information available to security workers. Although Tyman says they are not yet ready for use in office or campus settings, they could be useful around a stadium. 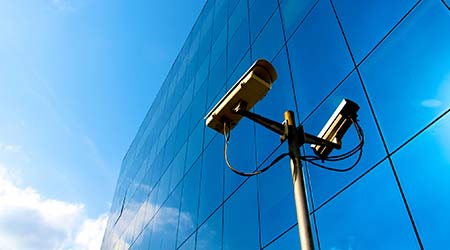