An ARMA study showed the differences between various roofing materials in heating and cooling in a cold climate.
By Chadwick Collins   Roofing

Choosing the most energy efficient roofing system for a particular climate can be a daunting task. Although reflective, cool roofs are most advantageous in hot, sunny climates, facility managers should understand that the same roofs may not produce the same advantage in cooler climates.

From November 2009 to May 2016, a study led by the Asphalt Roofing Manufacturers Association (ARMA), reviewed data from four different roofing systems installed on separate, identical buildings in Jamesville, N.Y. Other parties involved were CDH Energy of Cazenovia, N.Y., the Polyisocyanurate Insulation Manufacturers Association (PIMA), and the EPDM Roofing Association (ERA). The research project evaluated the energy performance and economics of cool or vegetative roofing systems in climate zones 5 and 6, as identified by ASHRAE.

Cool and vegetative roofs installed in warm climates can reduce the amount of heat absorbed by a building, optimizing energy consumption and lessening environmental strain. Typically, directly comparing these roofing systems in real-world settings is challenging because of the variability of internal loads and other effects from building use. The Jamesville buildings are located on the same site at the Onondaga County Correctional Institution and have comparable operating hours and occupancy conditions. Furthermore, they are served by the same heating plant, providing an excellent basis for building performance comparison.

• Unit 3 – EPDM plus four inches of polyiso plus vegetative roof.

When looking to measure the roofing systems’ energy impacts, several means were considered. Ultimately, the decision was made to measure the temperature differences within the roof assembly. This option aligned best with the project schedule, building configuration, and limited access in the facility.

Temperatures were measured at two locations (A and B) on each of the buildings with thermocouples at three levels:

• On top of the insulation but under the roof board,

• Under the roof insulation, and

• Just below the ceiling inside the building.

Temperature data was collected once per second from each of the 24 thermocouples, and was totaled and averaged every 15 minutes in onsite data loggers. An offsite master data logger downloaded the data daily via modem for verification and analysis.

To represent the heat flux through the entire roof assembly, a one-dimensional model of the steady-state heat flux through the insulation layer was created. Heat transfer through a roof is proportional to the temperature difference through each layer. Because all of the roof systems in Jamesville were exposed to similar interior and exterior conditions, the performance of each system could be directly compared at each time step.

EnergyPlus modeling (an open-source, whole-building energy modeling engine from the U.S. Department of Energy) showed that the simple model accurately represented the heat flux at the top of the roof assembly (i.e., into the top of the concrete layer). The heat flux into the space (i.e., from the bottom of the concrete layer) predicted by EnergyPlus was reasonably represented with an approximate correction to the simple model (assuming the concrete layer is highly conductive relative to the insulation layer and is essentially at a uniform temperature represented by the thermocouple under the roof insulation).

Plus and Minus of Cool Roofing

The Jamesville study sought to evaluate whether or not cool roofs provide net annual benefits in heating-dominated climates like Central New York. Although the buildings are not air-conditioned, the heat-flux measurements provide a basis to compare the relative thermal performance of the roof assemblies.

The black EPDM membrane roof temperatures were up to 60 degrees F higher when compared to the white TPO surfaces. The TPO membrane significantly reduced surface temperatures in the summer, but resulted in greater heat losses in the heating season, because solar gains are less for TPO in winter and summer. Conversely, the black EPDM membrane contributed to higher heat gains in the summer but mitigated heat losses in the winter. 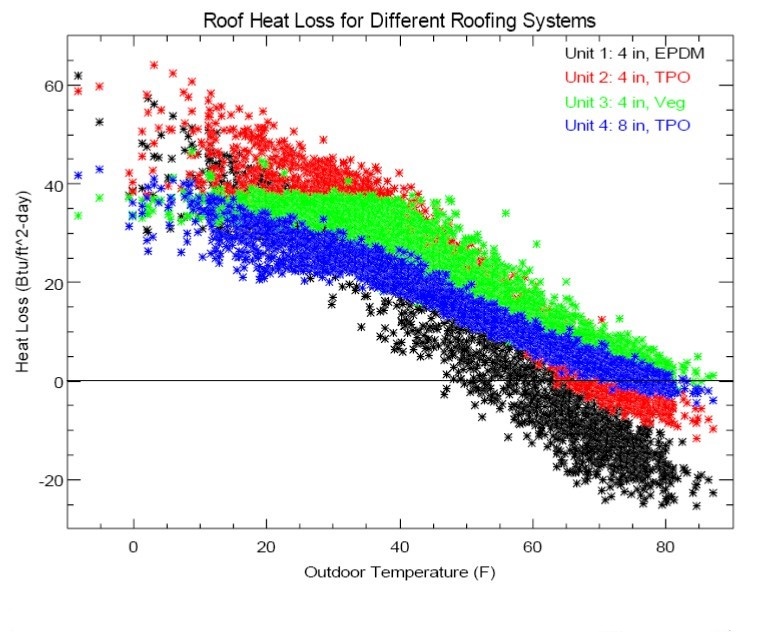 Meanwhile, the EPDM roof is less affected by melting ice and snow at the roof surface because the black EPDM material heats up and causes more melting, allowing less accumulation on the roof, and more days without snow cover. The decrease in snow cover results in more heat gain through the roof system, helping to reduce heating costs.

The two TPO roofs fall between these two extremes. The TPO roof with 4 inches of insulation (red) has a slight knee in the trend because more snow can accumulate and create a freezing liquid-solid layer at the roof surface. The TPO roof with 8 inches of insulation (blue) has less of a knee in the trend, mainly because the lower rate of heat transfer prevents melting/freezing from occurring at roof surface. Therefore, there is no change of phase to create the non-linear trend.

To conclude, the ability of TPO and vegetative roofs to reduce solar gains becomes a disadvantage in the winter. This real-world temperature data supports the theory that in certain climates, roofs with high reflectance may experience larger heat losses than roofs with low reflectance in the heating season. Building owners should consider overall energy performance when making decisions about roofing materials systems.

Evaluating the Effect of Roof Aging

The temperature difference between similarly insulated EPDM and TPO roofs was as high as 60 degrees F on summer days when installation first occurred. Within two or three years, the temperature difference dropped by 10 degrees F to 15 degrees F. Generally, the peak temperature of the EPDM roof held steady over the long term, while the peak temperature of the TPO roof increased by 10 degrees F to 15 degrees F — perhaps from soiling, dirt pickup, or aging. This long-term temperature increase of the white reflective roof appears consistent with the published rating numbers for this TPO membrane (initial and three-year reflectance ratings per Energy Star CRRC are 0.79 and 0.70, respectively). 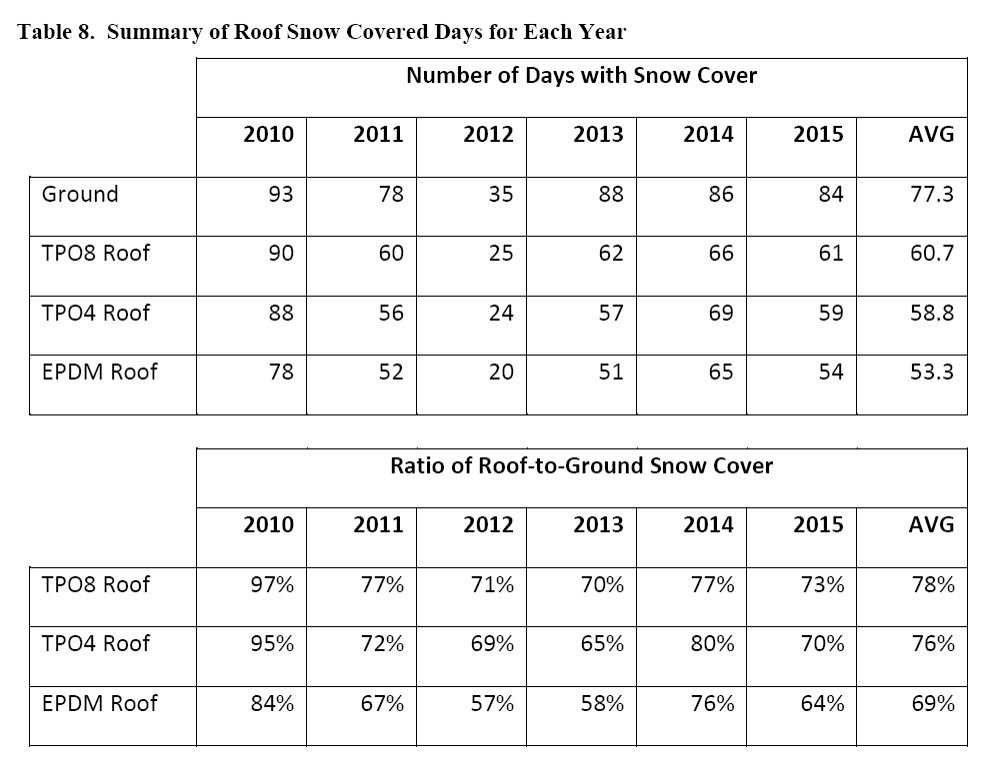 Table 1 shows the time that each roof has snow cover compared to ground snow cover. Generally, the time with accumulation on each roof is about 60 to 80 percent of the time that snow is on the ground. That percentage is lowest for the EPDM roof and highest for the TPO roof with 8 inches of insulation.

If days with ground snow cover are excluded, the trends become more linear. Focusing on snow-free days, the variation of heat loss with ambient temperature becomes highly linear for the EPDM and TPO roofs. The highly-insulated TPO roof has the lowest degree of scatter from the linear trend, since the impact of solar gains is minimal in this case. The vegetative roof shows a nonlinear trend, even excluding snowy days, since it retains water and ice even when no snow is on the ground.

The reduction in cooling energy usage and costs were determined assuming a seasonal average cooling efficiency of 0.9 kW per ton and an electric cost of $0.12 per kWh. The TPO-R22 roof reduced annual costs by $16 per 1,000 square feet compared to EPDM-R22, as did the TPO-R45 roof. The vegetative roof with R22 reduced cooling costs by $20 per 1,000 square feet.

Overall, the cooling cost savings were slightly smaller than the added heating costs with the TPO-R22 roof, increasing total annual costs by $8 per 1,000 square feet.

This analysis assumes that the facility was in cooling mode from May through September and in heating mode the rest of the year. This cooling season corresponds to a building balance point that is around the indoor set-point (65 degrees F to 70 degrees F). In many types of buildings, internal gains from lighting, plug loads and occupants can reduce the balance point so that interior space heating isn’t required until exterior temperatures drop to 50 degrees F to 60 degrees F.

The same internal heating gains could require cooling at lower ambient temperatures. Buildings with differing levels of internal gains can require more cooling and less heating, changing the impact of the cool roof on energy costs. If cooling is needed under moderate conditions (55 degrees F to 65 degrees F) this cooling load can be satisfied by economizer operation at little to no energy use.

Reflective and thermal properties served as the basis to compare each roof covering type, and no conclusions regarding other features and benefits for TPO, EPDM, or vegetative roof coverings should be drawn.

The four identical buildings were used to evaluate the energy performance of vegetative roofing systems relative to other conventional and energy-efficient systems in northern climates, including reflective and highly insulated roofing. Overall, a proper evaluation of the entire roof system, from deck to cover, is the proper approach to maximize energy performance effort for a new roof system, especially in climates that have to balance heating and cooling loads.

Chadwick Collins is director of technical services for the Asphalt Roofing Manufacturers Association.

Getting Good Roof Design and Installation