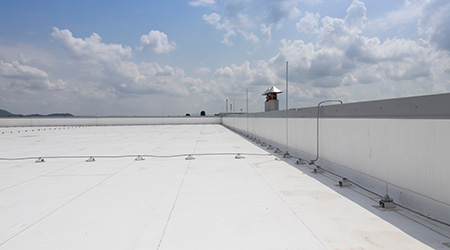 Product ratings and databases help facility managers make sure a roofing product is as cool and energy efficient as it says it is.
By Sarah Schneider   Roofing
OTHER PARTS OF THIS ARTICLEPt. 1: This PagePt. 2: How to Use the CRRC Database to Select Cool Roofs and Walls

Many facility managers recognize the benefits of highly reflective roofing materials — commonly referred to as “cool roofs” — in reducing building energy use, lowering energy costs, and increasing occupant comfort. Many facility managers may also be aware of the impact cool roofs have in mitigating the urban heat island (UHI) effect and improving air quality.

A third crucial factor for facility managers to understand in selecting cool roofs is the important  role of third-party rating systems in understanding the radiative performance (or energy efficiency) of a particular roofing material or how to identify cool roof products in the marketplace.

In the context of cool roofs, a third-party product rating informs consumers about the product’s ability to reduce solar heat gain —  the amount of heat that enters the building through the roof surface. The rating is based on radiative property data measured by an accredited independent testing laboratory, which is then verified and published by another third party. A third party may be a government agency, nonprofit organization, or another type of entity that is not affiliated with the manufacturing or distribution of roofing products.

Third-party ratings give assurance to those who select products that the data are credible and accurate. The data are obtained through consensus standards and industry-vetted test methods, and validated through quality assurance mechanisms. This is why third-party ratings are widely used by government agencies and energy utilities in the development, compliance, and enforcement of policies and programs that require or promote the use of cool roofing materials.

CRRC also maintains the Rated Products Directory, a resource for finding roofing products based on radiative performance. The CRRC Directory contains more than 3,000 roofing products that have undergone testing, weathering, and rating in accordance with the CRRC’s strict protocols.

To be clear, a CRRC product rating is not a certification, ranking, or approval of a product. It describes the radiative performance of the roofing material. The “coolness” of a roof is determined by two basic properties: solar reflectance and thermal emittance. Solar reflectance is the fraction of solar radiation reflected away from the roof, while thermal emittance is the relative ability of the roof surface to radiate heat.

The values of both properties range from 0 to 1. The higher the number, the more reflective or emissive the product.

In addition to these two metrics, the “coolness” of a roof may also be represented by the Solar Reflectance Index (SRI) value. This is a calculated metric that combines solar reflectance and thermal emittance into one value. An SRI value is usually between 0 and 100, with particularly cool materials exceeding 100.

Due to the UHI effect and the rise in extreme heat events, as evidenced by increasingly intense and deadly heat waves, more and more cities are mandating or promoting the use of cool roofs. This is especially prevalent in cities located outside of the sunbelt, such as Chicago, Denver, Philadelphia, Baltimore, and New York City. These metropolises are in many ways more vulnerable to the impacts of heat due to a lack of cooling infrastructure and heat acclimation, as compared to historically hot cities like Phoenix and Las Vegas.

A study conducted by Lawrence Berkeley National Laboratory found that highly reflective exterior walls can save as much energy as a cool roof in U.S. climate zones 1 - 4 and in all 16 California climate zones. Combining a cool roof with solar-reflective walls will undoubtedly increase a building’s overall energy efficiency while helping to combat UHI and climate change.

The U.S. Green Building Council recognized the role of highly reflective walls in reducing urban heating with the adoption of a LEED pilot credit last April. Under LEED Version 4.1, one point is awarded for the installation of a solar-reflective wall product. To achieve the credit, at least 75% of the building’s gross exterior wall area (including vertical fenestration) must be surfaced with a wall material that has a solar reflectance of at least 0.60 and thermal emittance of at least 0.75.

Sarah Schneider is the deputy director of the Cool Roof Rating Council (CRRC), a 501(c)(3) nonprofit organization that develops scientifically supported methods for evaluating and labeling the radiative properties of roofing and exterior wall products.