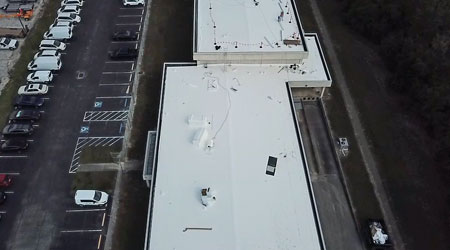 From scheduling work to taking into account future maintenance requirements, here's how one Florida county is planning to get the most out its roofing projects.
By Dan Hounsell, Editor-in-Chief   Roofing
OTHER PARTS OF THIS ARTICLEPt. 1: Savvy Strategies for Roof Maintenance and ReplacementPt. 2: This Page

To maximize the performance lives of the county’s roofs and put off the need for replacement, the department relies on a comprehensive roof maintenance program.

“All of our buildings get a monthly roof inspection,” Bednarik says. “When it’s a modified roof or a traditional shingle roof, they look for cracking and cupping and soft spots with those, along with gutter backups and things growing out of gutters. With single-ply roofs, we look for tears, build-ups around drains, and debris. We also take note of the warranty expiration.”

When a program has to cover 500 facilities, challenges come with the territory.

“One challenge is being consistent with roof inspections,” Bednarik says. “We give them out as work orders, and we hope the technician goes out on the roof and actually does the roof inspection. That’s probably a challenge that everyone has.”

“Some roofs don’t have easy access, so the inspector has to bring a 28-foot ladder or a lift to access them,” Bednarik says. “That becomes a challenge, as well.”

In 2020, the department identified one likely roof replacement project — the Jack Alberts Records Retention Facility, which is one of two records storage facilities for the county’s clerk of courts. The 15,736-square-foot building was built in 1991.

The first step in assessing candidates for a roof replacement is to review its inspection and repair history.

“We do a PM on these roofs monthly, so we determined at some point that that roof needed repair,” Bednarik says. “But there were also numerous work orders, so we were able to pull out those work orders and look at them over a period of time and note that there was a serious problem.

“The maintenance team looked at these situations, and we determined that there was a need for a new roof — or at least the need to look into it. So all of that information was compiled and given to T.J., and he determines through that whole process whether or not that roof is going to be replaced.”

Pyche then took a closer look at several key factors related to the records center’s roof in question.

"When we grade them, we take into account the criticality of the building,” he says. “So in the case of a records building that’s leaking, that’s obviously very critical that we fix that. There were numerous work orders in place where operations and maintenance had gone out and repaired the roof, so based on the roof’s age and the fact that we’d been chasing leaks for years, the decision was made to replace the roof.”

The roof recovery project on the Jack Alberts Records Retention Facility started in October 2020 and was completed in early November. As always, weather and timing were considerations in scheduling the project.

“We have to schedule our roof replacements early in the year so we’re not competing with the rainy season, which is from late May through September,” Baxter says.

Then there is the matter of the replacement roof. The building’s original raised panel metal roof was 30 years old.

“It had leak issues and definitely needed to be replaced,” Psyche says. “We went with a single-ply over it. We put the insulation in, then put the single-ply roof over the top of it.”

Why install a single-ply system and not another metal roof?

“We leaned toward the single-ply on a lot of our roofs because the warranty is so good, and it’s a little easier to locate a leak when it does leak,” Baxter says. ”Repairing them also is a little easier.

“It was a little less intrusive to go with the single ply — putting down insulation and wrapping it with the single-ply roof — because you’re not taking the roof off at any point to put a new roof down and exposing the building to the elements.”

Few facility upgrades go as planned, with few if any complications or challenges at some point, but this project was one of those select few.

“Everything went as exactly as planned,” Baxter says. “There were a couple of little areas that had to be redesigned during the project, but the contractor took care of them with no problem. We didn’t run into any change orders or anything like that. It actually was one of our better projects. And I haven’t gotten any calls that it’s leaking, so it's performing as intended right now.” 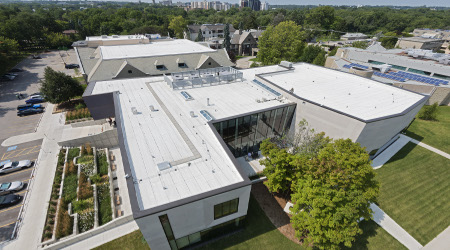