Because a vegetative roof adds more weight to a structure than a traditional roof might, and because of the need for water on the vegetative roofs to keep plants alive, the post-installation phase involved a fairly radical test.

"One thing they did prior to installing the vegetation on the roof was flood the roof for five days," Van Rees says. "We actually had about 4 inches of water sitting on top of the roof to make sure it didn't leak." The test was a success — no leaks — and that situation has not changed in seven years.

"We have had no leaks other than leaks around exhaust fans that come through the roof," Van Rees says. "We've had issues with their rubber boots (around rooftop equipment) but no actual roof leaks. It hasn't affected our workload at all, even as it compares to another roof. The roof is only seven years old. Supposedly, we'll get another 20 years out of the roof because it's not exposed to" ultraviolet light.

The roof also has not brought additional responsibilities to Van Rees's department.

"There's nothing to maintaining the vegetation, other than weeding, and we contract that out to a landscape contractor," he says. "That's really the only thing we do, other than maintenance and inspection around the parapet. That's the only thing that's exposed."

One essential element in the roof's success was the inclusion of an irrigation system.

"An irrigation system was installed, and we irrigated the roof for two years to establish it," he says. "Then we disconnected the system. It's up there, but we don't use it.

"I would recommend no matter what that you put irrigation up there for the first two years because you just don't know what the rainfall is going to be. You need to get the plant life established so it's strong." 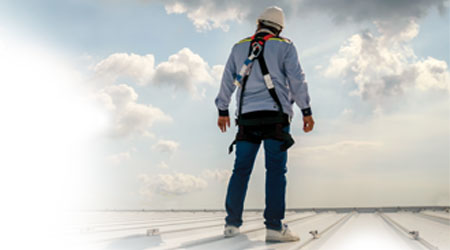