Energy Savings From the Outside In

In most cases, the main criteria for the selection of metal roofs and walls are low maintenance requirements and the system’s durability.

Limiting maintenance costs and selecting a durable system are only part of the story, however. That’s because both of these also are key ingredients in what is increasingly becoming another consideration for metal roof and wall systems: environmental responsibility.

The main way metal roofs and walls can be environmentally responsible is by helping cut energy usage and bills. Two elementary schools in Georgia show just how energy- and cost-effective metal roofs can be. In 2002 and 2003, the Paulding County School district constructed two new schools. Both are 90,000 square feet, contain the same HVAC unit and have the same orientation to the sun. Each is covered with the same insulated metal roof, painted dark green. Moreover, the thermostats for both schools are controlled at the district office.

However, the roof over Lillian C. Poole Elementary is painted with infrared reflective pigments, while the roof on Bessie L. Baggett Elementary contains a conventionally pigmented coating. The difference in the roof coating is a big reason that the annual energy costs were about $113,000 at Baggett Elementary, versus $99,000 at Poole Elementary — an annual savings of about $14,000. “Every time I look at a particular month, the power bills are less” at Poole, says John Cochran, construction manager with the district.

As these numbers show, what are often referred to as “cool metal roofing systems” can reduce energy use and costs. Moreover, the Cool Metal Roofing Coalition reports that buildings consume one-third of all energy in the U.S. Reducing the energy required to cool a building can have a tremendous impact on our country’s overall energy use.

Just what is a cool metal roof? “In layman’s terms, it’s a roofing system that reduces energy consumption by lowering the cooling load,” says Greg Crawford, executive director with the Cool Metal Roofing Coalition. “It has to reflect and re-emit solar energy so that it doesn’t come inside the building envelope.”

When the sun’s rays hit a reflective roof, the rays are reflected back into the atmosphere, says Robert Scichili, of Robert Scichili & Associates. For every one percent increase in a roof’s reflectivity, the temperature on the roof drops one degree. Cool roofs are designed to reflect and emit heat so that it isn’t transferred into the substrate and then into the building interior.

Emittance refers to the amount of absorbed heat that is re-emitted back into the atmosphere. The more heat that’s emitted, the lower the temperature of the roof and the facility it covers.

Both the roof’s reflective and emissive capabilities are important to its cooling ability. If a roof is reflective, but tends to retain energy it does absorb, its temperature still will increase. That’s the case with metal roofs that are unpainted, says Scott Kriner, technical director with The Metal Construction Association. They’re highly reflective but score lower in terms of emittance. These types of roof systems are beneficial in areas where heating loads dominate.

Traditional asphaltic roofing systems tend to be “large solar collectors,” says Rob Haddock, director with the Metal Roof Advisory Group and chief executive officer with S-5. “They’re perfect black bodies with a solar absorption ration of 1.0.” Much of that absorbed heat then is transmitted into the building’s conditioned space, driving up cooling loads.

Several organizations and regulatory agencies have developed criteria to determine just what constitutes a cool roof. In general, however, on buildings with a low-slope roof, a roof is considered cool if it reflects 65 to 70 percent of the total energy from the sun’s rays, says Mark Thimons, senior product research associate with CENTRIA.

Until the last five or six years, a cool roof was almost synonymous with a white or light-colored roof. Today, advances in technology allow darker paint pigments to reflect the sun’s rays more effectively. “They’re almost magically reflective,” says Crawford. Moreover, this reflective ability doesn’t alter the color of the paint. That’s why the roofs on both of the Paulding school buildings looked the same.

Pigments with these special reflective properties are usually embedded in the common exterior paint finished used in metal roofing and wall panels. The polyvinyldene fluoride, or PVDF, paints are commonly known by their trade names Kynar 500 or Hylar 5000.

“It’s the Cadillac in painted metal,” says Kriner. The PVDF coating is applied with a coil-coating process and then oven-baked, helping to ensure its durability. As a result, the paint maintains its reflective properties for several decades. A study conducted at Oak Ridge National Laboratory found that after three years, PVDF metal roofs had lost less than 5 percent of their original reflectance. Additional field studies have indicated that the pre-painted metal roofs will retain 95 percent of their original reflectance for at least several decades, says Crawford. As a result, facility executives can be confident that the energy savings experienced by the third year will be repeated year after year.

The technology used in these new pigments actually was developed in the military in the 1960s, where it was used to reflect heat away from tanks and trucks, so that they wouldn’t be detected by radar, says Scichili. “Then the truck or tank would look like a dot on the radar. You would know something was there, but you wouldn’t know what.”

However, it’s just in the last six or seven years that the technology has been incorporated into paint.

That’s not all. Cool roofs can help reduce the urban heat island effect. This is becoming more important in large urban areas, where a concentration of roofs that minimally reflect and emit ultraviolet rays actually raises the overall temperature. “If you can reduce the roof’s temperature, you can bring down the temperature around the building and reduce smog,” says Kevin Corcoran, vice president of strategic planning with Englert. That’s because warm air produces more smog than cooler air.

At the same time, the reflective pigments can be blended into almost any color, eliminating the requirement that cool roofs be either white or very light colored. As the Poole Elementary in Georgia revealed, even darker colored roofing systems can be cool.

Moreover, the cool roof coatings typically don’t carry a higher price tag, says Kriner. “The industry has settled into a practice of not charging significant premiums for these coatings.”

In any discussion of cool roofs, the question inevitably arises: Does every building need one? Initially, it was assumed that buildings in northern climates, such as in Chicago and Milwaukee, didn’t. Conventional wisdom held that with their harsher winters, facility executives would be better off capturing solar energy in the winter to reduce their heating loads, says Crawford.

Now, that thinking is shifting. Even buildings in northern climates often use more energy to cool their buildings in the summer than they require in the winter to heat them, Scichili says. As a result, they often can benefit from cool roofing systems.

Even so, that doesn’t mean that every roof should be cool, as some regulators have proposed, says Haddock. If the facility has a significantly higher heating load than cooling load, a cool roof may not do much to reduce energy consumption. Or, if the building is used primarily at night, such as a bar or restaurant, a cool roof may not offer significant benefits.

Of course, even a building that’s not temperature-controlled, such as a storage shed, still will maintain a more comfortable interior temperature with a cool roof. Some chicken farmers, for instance, use cool roofs on their chicken coops, even though the temperature inside the coops isn’t regulated. They’ve found that the chickens are more productive when they’re in a comfortable environment, Kriner says.

Most metal roofing systems incorporate some level of insulation. “Ideally, you want both a cool roof and sufficient insulation,” says Thimons. Most building codes require insulation based on the building’s location and occupancy.

Insulated metal panels, typically containing several inches of polyurethane sprayed or poured between two panels, are available in thicknesses ranging from 2 to 6 inches, says Doug Pickens, vice president of sales and marketing with Metl-Span. “That provides R-values of 16 to 48, which is tremendous.”

The R-value indicates the insulation’s resistance to heat flow, according to the U.S. Department of Energy. The higher the R-value, the greater the insulating effectiveness. Most buildings use 2.5 to 3 inches of polyurethane insulation, gaining R-values of 20 to 24, Pickens says.

In comparison, fiberglass insulation generally provides an R-value of about 3.4 per inch. “To get an R-value of 24, you need about 7 inches of glass fibers, versus three inches of polyurethane,” Pickens says. Moreover, by using insulated metal panels, the insulation is automatically installed when the roof is assembled, rather than requiring a separate step.

When insulation is used, the vapor barrier should be placed on the side of the building that’s likely to be warmest, typically the inside of the building, says David Cunningham, national account manager with Metal Sales Manufacturing Corp. That way, the vapor barrier will keep any condensation from entering the insulation and reducing its R-value. In addition, it’s also important to incorporate a proper air ventilation system. “Without proper air movement, air will become stagnant,” Cunningham says, adding that this increases the likelihood of mold.

The earth-friendly nature of metal roofs extends beyond their ability to reduce cooling loads. Most contain at least 25 percent recycled metal, says Corcoran. Then, at the end of their lives, close to 100 percent of the metal can be recycled, reducing the amount of material heading to landfills, he says.

Another eco-benefit of metal roofs is that they are particularly well-suited for rain harvesting systems, says Kriner. The rain that falls on a metal roof can be collected and transferred to a storage tank, and then used for irrigation and other “gray water” applications that don’t require treated water. Reducing the demand for treated water is becoming particularly important in areas of the country experiencing water shortages, Kriner says.

Moreover, the long lifespan of metal roofs — most are warranted for 30 or 35 years, and some still are standing after a century — means that metal roofs don’t have to be replaced as often as most other types of roofs. That durability, one of the major reasons metal roofs are specified, saves not only time and money, but also resources — another environmental benefit. 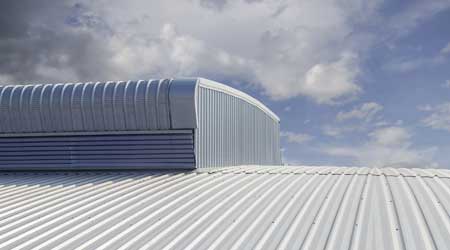 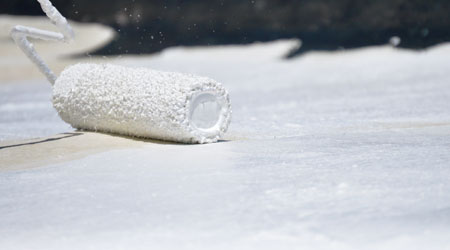